Our Wager With Nucks Misconduct

Share All sharing options for: Our Wager With Nucks Misconduct

We're putting our money where our beer goes. Or something like that.

Our "friends" at Nucks Misconduct and the proprietors of this place have a friendly bet over the outcome of the Blues vs. Canucks first round playoff series. You'll be shocked to hear it involves beer. 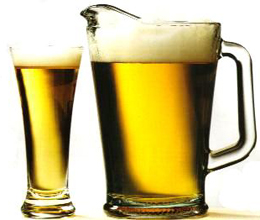 The lively banter between fans on both sites started Sunday night. And it's friendly. For the most part. But it's gotten heated here and there and it's bound to get more passionate as the series plays out. That's fine. All in good fun, right? And to ensure that we display the right kind of "Hey, we're just fans rooting a team. Don't take anything written here too seriously" attitude, we'll bring all the commenters together on the winning site and digitally shake hands like the players do at the end of a series. We'll see how that turns out.

So that's it. Two guys who spend too much time watching and writing about hockey will get treated to a cold refreshing drink and you commenters can play a part by chatting the opposition up and then coming together for a couple of  "Nice series" and "Good luck going forward" comments. And yes, at least one "I can't believe I just shook that guy's hand" comment.