Can Blues Escape From Detroit?

Share All sharing options for: Can Blues Escape From Detroit?

2009. Downtown Detroit is now a maximum security prison. Breaking out is impossible. Breaking in is insane. 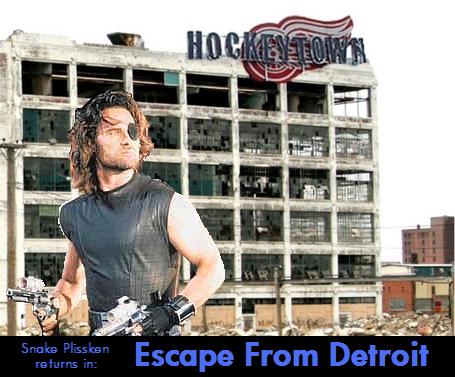 Thanks to Dooks for the photo.

Tonight was supposed to be the throwaway game. If the Blues went into Detroit and lost to the Red Wings, we'd all say, "who cares? We had points to break off and the winning streak wasn't going to last forever. Let's forget about Detroit and move on to the next opponent."

But the Blues lost last night in Chicago and didn't pick up any points at all. Suddenly the excitement and buzz behind pulling for the Blues has quickly turned into a Death Watch for their post-season hopes. Jeez, thanks Puck Daddy. What a difference one game makes, I guess.

Now we've all used up our Detroit excuses on the Chicago game. What does that leave us with? The same thing the Blues have now: No more excuses.

No more bullshit about letdowns or getting outworked or not getting a good start or not playing phsical enough. By my own research, we've been asking for the Blues to stop showing respect to this team for the better part of a decade.

Frankly, this franchise needs a little organizational amnesia. Detroit has owned this matchup for so long that it seems like the Blues have a hard time believing they can beat the Red Wings. If one more guy wearing the Bluenote says, "We just need to play a full 60 minutes against them because if we only play 59, we'll lose," then I'm personally going down to 14th & Brett Hull Way and pistol-whipping some sonofabitch.

The time has come to stand up to your nemesis and play the hard-nosed game you play against every other team in the league. Time to escape from Detroit with two points.

Can they do it or will they continue to play in awe of the winged wheel? My guess is that we'll know by about 6:40 central time.

Puck drops at 6:30 in the midwest, game is on FSN-Midwest and on KMOX. We're certain that some smart person will direct those without access to a viable outlet in the comments. This is your game day thread.