Share All sharing options for: Blues Playoff Chart For Apr. 4

Finally Chicago did something to help out St. Louis other than give us a place to send the weird kid from our respective families after college when they need to "find themselves." Three muggings, two home invasions and five run-ins with spray-on tan (orange) dudes with pockets full of roofies later, they're back in St. Louis, ready to be productive members of society.

So, thanks for that, Chicago. Also, thanks for beating Nashville in one of the most boring games in recorded history. We love all things hockey and even we were like, "Whoa, a 'Nitro Circus' marathon on MTV and MTV2?"

But no, we stuck it out, rooting for the Black(mouthvomit)Hawks. Bubble team life makes for the strangest of bedfellows.

Now, we know we haven't really held up our end of the bargain on this deal, either, as the guys over at Second Indian Committed City were quick to point out. Had the Blues beaten the Predators either of the final two times they played last season, they would have put the Hawks into the playoffs. Sorry for that, Hawkfan, but let's be honest: the Blues last season couldn't really be counted on to help themselves much, let alone you guys.

But now? Things are different. This year's Blues can be counted on. They've showed anyone who is interested enough to look beyond the standings (East Coast Media, we're talking about you) that they are a good, solid, hungry team. They can handle their own business this year.

And speaking of that, we can finally say it and mean it: the Blues control their own destiny from here out. Every team behind them in the standings has just as many games to play as the Blues. If they win out, no one can catch them. After chasing, well, everyone and then chasing the pack and then finally chasing the playoff spot, the Blues finally own one.

Everyone else needs the Blues to choke for them to jockey into position now. Talk about the playoff atmosphere pressure? Now they really have to deal with it. Lose and you open the door for someone to slip by. Win and it's all yours.

Playoffs, baby. Playoffs. How bad do they want it?

King of All Charts, DJ, has all the info you need for tomorrow. First and foremost, Blues have to take care of business, just like you'd do if some burger punk screwed with your literacola. Second of all, none of us would mind losses by the Predators, Oilers and Ducks.

If you can't see the chart, check out the bigger version. 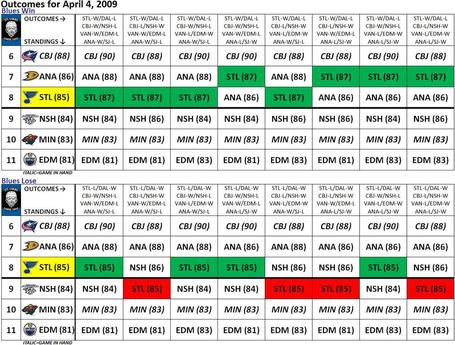