Share All sharing options for: Revisiting The Stempniak Trade

It was about mid-day on Nov. 28th last year when I started getting the phone calls.

"Where are you? How are you doing?"

Everyone wanted to know how I was handling the news that fan (and Game Time) favorite Lee Stempniak had been traded to Toronto for Alex Steen and Carlo Colaiacovo. 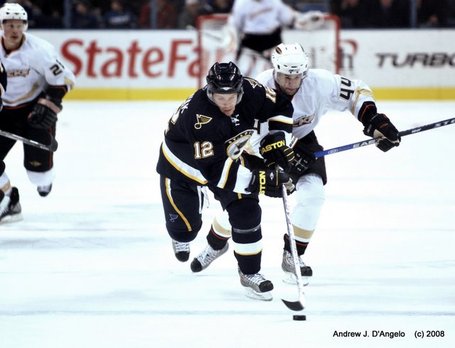 We had no idea that this would be the last time Dutchie would don the Bluenote.

See, it was Stempniak who gave Blues fans our first glimpse of anything resembling good news during that horrible 2005 post-lockout season. Our team was a wreck on the ice and off of it was worse. The team was for sale, fans were actively staying away from the rink in droves and no good players would be acquired by management. They'd let Pavol Demitra walk as a free agent and had traded away Chris Pronger for dimes on the dollar. The ownership group felt that a stripped down and cheap roster would make the team look more attractive to potential buyers (a misguided theory that the new owners would later refute).

They were dark, dark days.

But Stempniak gave us few die-hard fans something to root for. It started on Nov. 16, when Stempniak made a move and scored a beautiful goal to give the Blues a big win over the Blue Jackets. I was inspired enough to launch a contest to give the kid a nickname that very night.

That was the birth of the first post-lockout Kid Line: Stempniak, McClement and... that was it. That's right, times were so tough that the Blues could only muster 67% of a Kid Line.

But Stempniak, or Dutchie as he came to be known around these parts, was a sign that there was a future. Things would get better. The Blues would be back. And Stempniak, presumably, would be a big part of that.

And that's the reason I latched onto him. We watched for the first fan-worn 'Stempniak 12' jersey to be seen in the stands and then watched as the numbers of those fan jerseys grew and grew. I wasn't the only one, we all were rooting for the kid.

But that's the problem with rebuilding teams; they usually outgrow the players that kept them afloat during the down times. Stempniak, who had thrived with first-line minutes and a prime position as the first power play unit's triggerman, found himself down on the third line in St. Louis and getting limited power play opportunities.

And that made him overpaid.

So, yes, while like a lot of people (the commenters' names are a victim of the SBN changeover, but you get the idea), I wasn't happy to hear that Stempniak had been traded to Toronto, I saw it as a positive sign for the franchise: we'd gotten too good for one of our once-better players.

Now, almost five months later, how has this one panned out?

Well, Stempniak has modest scoring totals of 14 goals, 27 assists (41 points) and a minus-14 on the season. We'll cut him a break on his plus/minus as he has split the season between the once-awful Blues and the still-horrible Maple Leafs, but those scoring stats are a little skewed because he got hot right before being traded, leaving St. Louis with three goals and 13 points in 14 games (.93 pts/game). So in 58 games for Tranna, the Dutch man has tallied just 11 goals and 17 assists (.48 pts/game)

On the other side of the ledger are the two former first-rounders who came to St. Louis in the deal, Steen and Colaiacovo.

Steen, who had become a whipping boy of Leafs fans and media, had but two goals and four points in 20 games (.20 pts/game) before the trade. Since pulling on the Bluenote, he has become an effective third liner and has put up six goals and 16 assists (.39 pts/game) and is minus-12 on the year. 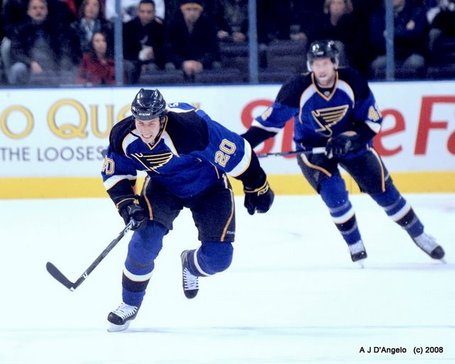 Steen's hustle and flashes of skill have been valuable to the Blues' third line.

Had the trade been Steen straight-up for Stempniak then it would have looked pretty close, with the edge going to Toronto. Two third-liners who can step up to the second line as needed and put up respectable point totals, though the financial edge would go to the Blues as Steen makes $800,000 less than Stempniak ($1.7 vs $2.5).

But then we throw in defenseman Carlo Colaiacovo. Another player who was feeling the backlash from unhappy fans and media in Toronto, the biggest knock on Colaiacovo was his terrible durability. He hadn't ever played more than 48 games in an NHL season and always seemed to get hurt in freakish ways. there was no doubting his offensive potential, but Leaf fans were sick of him never reaching his promised talent level. 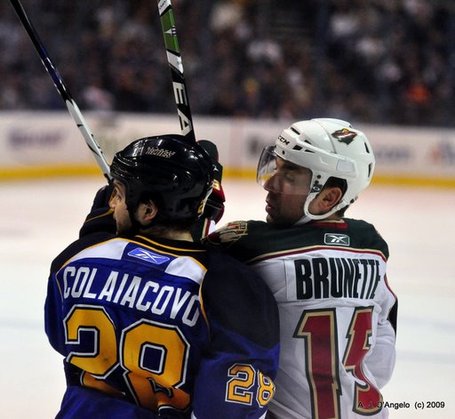 Known more for his offense, Colaiacovo has been solid defensively, as well.

In coming to St. Louis, Colaiacovo has broken through. He has played in 69 games this year (59 for the Blues, meaning his missed games came while still with Toronto), has smashed his previous career point total (30 this year versus his 48-games played 2006-07 when he tallied 17 points) and is scoring at a .49 pts/game clip for the Blues. he is plus-2 for the year (plus-4 with the Blues).

While the offensive defenseman of the Blues' future look to be guys like Erik Johnson and Alex Pietrangelo, Colaiacovo has definitely sent notice to Blues management that he intends to be part of the picture.

Just over a month ago, he told Dan O'Neill and the Post-Dispatch that,

The first words he heard from Blues coach Andy Murray were the exact words he needed to hear. "The first thing said to me when I came here was, 'Opportunity,'" Colaiacovo said. "I just was so excited to get that chance to finally be the kind of player that I imagined myself being."

If the Blues had traded Stempniak for Colaiacovo straight-up, I think most people would give the nod to St. Louis for coming up with the better end of the deal, especially with the financials again favoring the Blues' cap structure ($1.4 vs $2.5).

Combine all of the pieces of the trade, though, and this one is a definite win for St. Louis.

Those stas may all tally out to be fairly similar, but considering that Colaiacovo leads the team in points from the blueline ratches up the importance of his 30 points.

Again, Stempniak meant a lot to this franchise in the years coming out of the lockout. I'd even venture to say that Dutchie meant more to the die-hard fans like fans of GT and me because of the promise of better days he embodied. Unfortunately for him, better days are here now and he doesn't get to be part of it.

Also unfortunately for him, we'd do that trade again in a heartbeat.