As the Blues are preparing to play Tuesday night in Phoenix, the temperature will be in the upper 80s. As the Cardinals take the field to play baseball this afternoon in St. Louis, it was snowing less than five hours before game time. 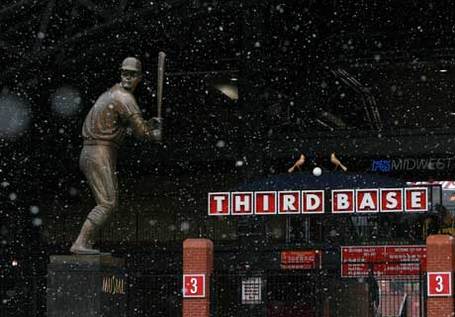 We get that St. Louis is a baseball town. Hell, we even had a baseball paper for two years before we got that out of our system. The snow was a nice reminder that the Blues are still kicking and on the verge of making the playoffs. Friday night's last home game against Columbus promises to be one helluva show. More on that later this week obviously.

Feel free to leave your well wishes for those going down to sit outside and watch the first of 162 baseball games (just think, it will probably be 100 outside by early July!). Or talk about how you have a nervous spot in the pit of your stomach knowing that the Blues have to win and get at least a little help to make the postseason over the next week. Or maybe that's just me...