Share All sharing options for: Did The Blues Blow The 2006 Draft? 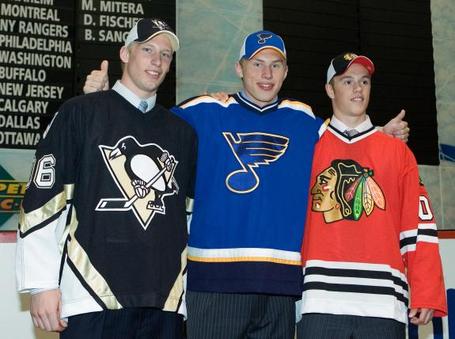 Alex, I'd like three millionaires still in puberty for $1,000.

I'll start by admitting that asking whether or not the Blues made a mistake by taking Erik Johnson over Jonathan Toews right now is patently unfair. But with Toews ( I mean Taves) leading his Chicago Blackhawks...gulp...to the Conference Finals for the first time since 1995, I think it's a decent topic to talk about -- unfair or not.

Before that draft when the Blues had the No. 1 overall pick (ah, the glory days), it was obvious the Blues at the NHL level had a lot of holes. They didn't have a true No. 1 defenseman, they had depth problems with skilled fowards. Those are both of the areas teams try to address that high in the draft. The first player selected should be (knock on wood) a cornerstone guy for the franchise, someone you build around. That's exactly what Chicago did with their young captain. And that's what the Blues are trying to do with Johnson. If only he hadn't gone golfing with the veterans (the damaging effects of Manny "Golf Trip Planner From Hell" Legace live on).

As you look at the roster for the Blues next year and try to understand what the needs are on the team, the most glaring spot is an offensively gifted defenseman who can hopefully help in the transition game and give a legit shot to the point on the power play. That's what Erik Johns was drafted for and the role he will play on this team...when he's healthy.

So knowing what you know now, would you rather the Blues have drafted Toews(Taves) or Johnson? Vote in the poll, show your work in the comments.