The Worst Jersey In The World

Share All sharing options for: The Worst Jersey In The World 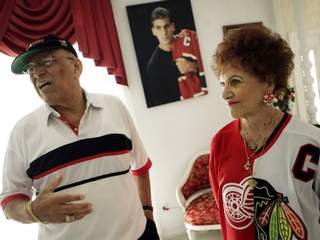 Proving once again there are some things you can't unsee.

That smiling older woman with the Frankenjersey is Susan Chelios, the mother of Chris Chelios. Yes, both his parents are still alive. They look great for having a son in the NHL who has to be closing in on Social Security check cashing age. That makes them what, as old as dirt? No, that's their son. They're officially oder than dirt. And possibly in the mob -- which would explain a helluva lot of things.

Ever see that movie "Unbreakable?" In it, Samuel L. Jackson is looking for his opposite, Bruce Willis. At the end (Spoiler Alert for a movie that came out about 10 years ago!), he justifies being a mass murderer and terrorist so that he could find the exact other end of the spectrum from himself. It gives him his place in the universe.

A woman who loves the Blackhawks AND the Red Wings...She's either the devil incarnate or my exact opposite. But unlike Mr. Glass, that jersey is just one big mistake. Sorry for making you see it.

(Hat tip to Internet friend Greg Wyshynski, aka Puck Daddy, for the story and the term Frankenjersey.)