Share All sharing options for: Jarmo Kekalainen Gets Contract Extension 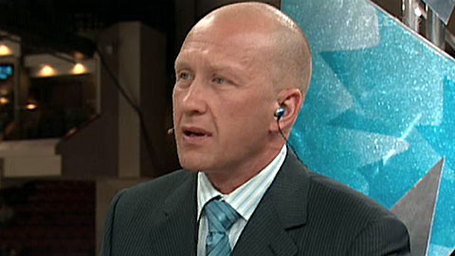 The architect of the St. Louis Blues' draft, arguably the biggest factor in the resurgance of the team, was rewarded Friday with a contract extension. Assistant General Manager and Director of Amateur Scouting Jarmo Kekalainen was extended for an unannounced number of years, according to a release from the Blues.

The team also gave Kevin McDonald a contract extension and named assistant general manager in addition to his director of professional scouting duties.

For the regulars around here, we've been pretty open with our appreciation for the job Jarmo has done with the draft. He originally joined the Blues in September of 2002 after being the mastermind behind the successful drafts for the Ottawa Senators. Before Jarmo, the Blues' drafting was a joke. It was so bad, the front office had no qualms with trading first round picks because they knew the players they took would never amount to anything. Plus it saved money on all those No. 1 draft pick sweaters they hand out at the draft every year.

In the six drafts since Jarmo arrived, there have been 15 players chosen by the Blues who have seen at least one game in the NHL. Sure there are some misses on that list and a few of the guys with NHL experience have literally spent one game in the league, but that count doesn't include players like Ian Cole, Lars Eller and Aaron Palushaj who could be in the NHL in the next two seasons - among other highly-regarded players.

The player that Jarmo built his reputation on is TJ Oshie. Before the 2005 draft, Oshie wasn't high on a lot of draft boards and the Blues were criticized for taking him. Later it was speculated the Blues picked him one spot before Edmonton would have. Critics were quickly silenced as Oshie scored 24 goals his freshman season at University of South Dakota and won the Bermuda Cup. You might remember that Teeej made kind of a splash this past season, his first in the NHL.

By extending Jarmo, the Blues lock him up and keep other teams' hands off of him. Some day I expect he'll be an NHL general manager. Until then, he'll continue to help build the Blues from within.

Quick poll. Tell us what you think of extending Jarmo's contract.