Checketts Is Serious About The Rams?

Share All sharing options for: Checketts Is Serious About The Rams? 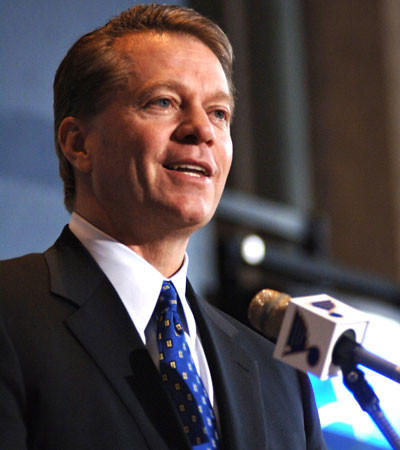 "How much for your Rams? Your Cardinals? Are the Steamers still around? I want to buy them all."

The Post-Dispatch traded e-mails on Monday with Dave Checketts, you know the guy who owns the Blues as part of an investment firm based in New York. In the e-mail exhchange, Checketts renewed his interest in buying the St. Louis Rams.

"We have the ability to get this done and we have communicated this to the Rams," Checketts wrote in an e-mail. "We approached this with the Rams months ago and have since that time put together a partnership of both concerned St. Louisans and outside capital.

"Last week, we communicated to Chip Rosenbloom in no uncertain terms, that he now has a clear St. Louis buyer. We are that buyer.

"We have reason to believe the NFL would approve our group as we have carefully explored their ownership requirements."

In case you're not following the saga with the St. Louis NFL team, owner Georgia Frontiere died in January 2008 after a long battle with cancer. Her children Chip Rosenbloom and Lucia Rodriguez inherited the team. The problem is the inheritance tax on the team is close to 50 percent and the team is valued at more than $900 million (with Frontiere's portion about 60 percent and minority owner Stan Kroenke's portion at 40 percent). They can't afford to keep the team.

Apparently the franchise has been quietly available for purchase, but no legitimate offers have been made. Over the weekend Internet friend Bernie Miklasz wrote about the team being officially for sale and that bidders who wouldn't promise to keep the team in St. Louis would now be considered.

Checketts has quietly said in recent months that he was interested in exploring the possibility of acquiring the Rams, so his comments to the Post are not completely surprising. But the extent of his interest really hasn't been known until now. Checketts is a busy guy. He's overseen a great resurgence with the hockey club. He's spearheading an effort to renovate and reopen the neighboring Kiel Opera House. On Miklasz's radio show last week he said the Blues would like to host the NHL All-Star game in 2011. Now he wants to head up a group to buy the Rams.

As a Blues guy, it would worry me that Checketts and his group are over-extending themselves with an NFL team. Their seasons have a major overlap. There's a huge issue with the Edward Jones Dome and making it a viable stadium or the huge hurdle of even starting the conversation of a new building for the team. The Rams have been a mess, an even worse situation than the Blues were in when Checketts purchased the team a few years ago. I would hate to see what he's started at the Drinkscotch Center suffer because of the ambition to buy an NFL team, the pinnacle of sports ownership in North America.

But as a Rams fan too...I would love to pay my money to buy tickets from Checketts. I don't want the Rams to leave and I love NFL football. If the Rams found another home, St. Louis would be shut out of the NFL for decades, if not forever.The new Rams owner needs to get the football team to reconnect with the city and the fans and find a way for the team to get working in one direction and succeed. If anybody could do that, it's Checketts. With the Blues, he's put smart hockey people in charge and let them do their thing with a workable model that he has stuck with since he bought the team. I could imagine him doing the same for the Rams. In that case, he would put more of a face on the team and probably spend even more time in St. Louis, which would be good for the Blues as well.

Gallagher noticed that when the Blues made the playoffs this season, he had never heard so many fans saying they were thrilled for the ownership. I almost feel like Blues fans have such a good thing with Checketts, we don't want to share him.

I can see folks going either way. So I ask you, dear reader, how do you feel about Checketts wanting to buy the Rams? Vote and give your reasons in the comments.