Share All sharing options for: Blues Choose in the SBN Mock Draft

Your Game Time Prospect Department was recently given the honor of representing St. Louis and the Blues in the SBN Mock Draft, making a pick at 17th overall which is intended to (somewhat) accurately reflect the wishes of the fanbase, and be based on an informed analysis of the organization's needs and draft tendencies.

In a series of recent online articles (linked below), we have tried to break down the Blues' draft tendencies in the Jarmo Kekalainen era and present a list of players who project to be available when it is the Blues' turn to select in each round of the draft (through Round Four).

What exactly IS a "Blues' prospect," anyway... Part One

What exactly IS a "Blues' prospect," anyway... Part Two

What exactly IS a "Blues' prospect," anyway... Part Three

Game Time's "Silver Seven" for Round One

Based on that breakdown and analysis, as well as on the results of online polling and the comments posted by you, the readers, after each article, we here at the Game Time Prospect Department have made our selection for the Blues in the SBN Mock Draft.

And the winner is...

KREIDER SCOUTING REPORT: Committed to Boston College for 2010-11 season ... combination of size, speed and skill should make him a top pick in the earlier rounds ... an excellent skater with explosive speed and acceleration ... short-distance speed is exceptional ... sees the play ahead of time and knows what he's going to do with the puck as soon as he gets it ... an excellent passer and playmaker... a constant threat to develop breakaways on the penalty-killing unit ... has both an excellent wrist and slap shot, with a quick release ... a great character player... a presence in the locker room.

Just the other day, the Blues re-signed veteran forward Keith Tkachuk. In Kreider, the Blues will have drafted a Tkachuk clone who will eventually be what Tkachuk was in his prime -- a strong power forward and goal-scoring machine -- while bringing to the table a level of speed and skating ability that even Tkachuk did not have.

Kreider was ranked 14th overall by NHL Central Scouting in their final North American rankings, while nailing down the 24th-overall spot in both the International Scouting Services and "The Hockey News" final rankings.

"The Hockey News," in their 2009 Draft Preview, notes that Kreider is "a boffo skater and an absolutely dominant player with Andover Academy," but also notes that scouting prep/high school players is among the toughest challenges faced by a scout due to the discrepancies in the level of competition from night to night. 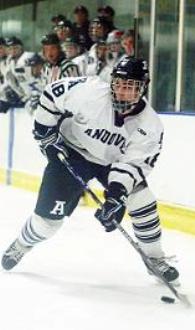 ISS also makes note of Krieder's skating ability, and further comments that the young New Englander "(h)as very good offensive skills and can be dangerous one-on-one. He can be hard to play against down low when he plays physical. He's not a big hitter, but he doesn't shy from contact. The most appealing thing about Kreider’s game is the fact that he combines all that size and strength with great agility and very good foot speed. He does have top-end skills and the ability to make smart decisions and great plays at top speed in tight areas and with little time.

ISS goes on to compare Kreider to Eric Staal, the oldest and (arguably) best of Canada's new First Family of Hockey.

The selection of Kreider was made difficult by the depth of this draft; of the seven players highlighted by your GTPD as probable Blues' targets in the first round, five were still on the board when this selection was made, including Drew Shore, whom we at the GTPD have been high on all year, and Chicago Steel defenseman John Moore.

We thought long and hard about taking Moore, a slick-skating offensive defenseman who would have added enormous skill and offense to the Blues' future blueline... the thought of a top six in the very near future featuring Erik Johnson, Alex Pietrangelo, Ian Cole, Barret Jackman, Carlo Colaiacovo and Moore was awfully appealing, and the depth of this draft makes it very likely that a solid forward talent of borderline first-round quality (such as Anton Lander, Carl Klingberg or Ben Hanowski) would still be available for the Blues at pick no. 48 in the second round.

In the end, however, Kreider's skating and offensive upside were simply too good to pass on.