Share All sharing options for: Brett Hull Elected To Hockey Hall Of Fame 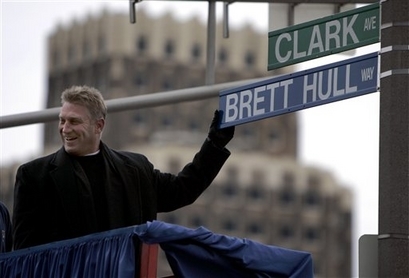 His number is retired, he has his own street. What's left, a statue?

The World Wide Leader says Brett Hull has been told he's been elected to the Hockey Hall of Fame ahead of today's announcement. Shocker, I know. He and father Bobby Hull become the first (EDIT: Lester and Lynn Patrick were the first, just 52 years ago) second father-son duo to be enshrined in the former bank in downtown Toronto.

"It's a great honor, it's really unfathomable," Hull told the Dallas Morning News ahead of the official announcement. "I mean, when you're a kid, you dream about someday playing in the NHL or someday winning the Stanley Cup, but you just don't think about this, so it's hard to prepare yourself."

Talking about Brett Hull is always a little uncomfortable for me. He's the reason the team became popular in St. Louis in the 1990s. That popularity brought fans, a new building, a higher payroll and lots of great memories. But like many things with the star crossed Blues, it was never a smooth ride and it ended poorly.

Sure Hull scored a lot of goals and won the Hart trophy. He was a perennial All-Star. He had the biggest sports personality in this city for almost a decade. Yet he never took the Blues past the second round of the playoffs. He didn't commit to being a more well-rounded player until leaving for Dallas as a free agent. He won Cups with the Stars and the Red Menace. He retired a Hamilton Phoenix Coyote. He wasn't even drafted by the Blues, starting his career instead with Calgary. But he's the only hockey player in Blues history to have a street named after him. His 741 goals ranks third in league history behind only Gordie Howe and short-lived teammate Wayne Gretzky.

Everybody who was a Blues fan in the 90s has a Hull story -- either a run-in with him in public or a memory of watching him score a goal that sticks with that person. When they retired his number a couple years ago, his good friend and Blues broadcaster Kelly Chase talked about how he got word he was being promoted from the farm team in Peoria. The former NHL enforcer said his coach told him there was a kid named Brett Hull who needed some babysitting up in St. Louis. "Silly me, I thought they only meant on the ice." During that same ceremony I remember getting a little choked up watching the highlights and hearing Hullie talk about the good times in St. Louis. Hell my voicemail pin number is still 1216 -- Oates to Hull.

Bottom line: he was one of the five most famous players in the NHL during his peak seasons. He was the face of the franchise and helped propel it to prominence in this city and in the league. But in the end the team allowed him to walk away during free agency allowing him to win not one but two championships for teams most Blues fans really don't like.

In the comments, share any memories you have of the Golden Brett.