Let's Go Golfing With The Oshies!

Share All sharing options for: Let's Go Golfing With The Oshies!

As everyone knows, the seeming non-contact sport of choice amongst NHL players is golf. And while we all learned last summer that it can be way more dangerous than ever thought before, it's not going away anytime soon. On top of that, lots of NHLers host golf tournaments to raise money for their charities, allowing the casual fan with disposable income to bring a foursome, spend some time with celebrity athletes and while away a few hours on the links.

For fans of the Blues, it's pretty unlikely you'll get invited to the unofficial Blues team-bonding round at the Lake of the Ozarks this year, so you might as well do the next best thing: get yourself to North Dakota next month to participate in the Third Annual Oshie Sports Celebrity Benefit and Golf Tournament. The tournament takes place in Grand Forks, ND on July 28th and 29th.

The list of celebrities has yet to be announced, but it's a pretty solid lock that T. J. Oshie will be there, as the group that is hosting the event is actually run by his father, Timothy Oshie Sr, also known as Big Osh or Coach Osh. At this point we're not sure, but we assume he'd frown on being called Big Teej. 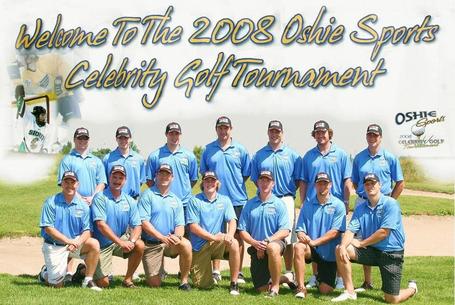 And no, we have no idea why Scott Hartnell is there.

Money raised by the event is used to donate to local charities in North Dakota; a community that has, "been so gracious to T.J." in the past. Here are other details for anyone interested in making the trek to the Dakotas next month:

Honestly, we feel like this is worth mentioning because there are enough GT readers out there who would be interested and would have the opportunity and means to attend. If that happens, of course we expect many, many FanShots to be posted with pictures of you plying the Teej with Buttermilk Ranch Sauce cups from Jack In The Box.

For more information, check out the event page on Facebook or email the director at oshiesports@gmail.com. When we get an updated list of attending players we'll be sure to update you.