Share All sharing options for: Translating John Davidson Before The NHL Draft 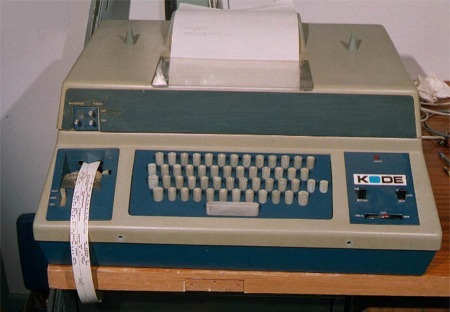 It's oiled up, paper is loaded and ready to decipher GM Speak.

With the NHL draft just a day away, I know that we're going to be hearing a lot about the upside potential with Blues draft picks and how these pimply-faced 18-year-old phenoms will have the chance to be the face of the franchise in a few years. So I thought it would be best if I went down to the basement, got into the water-proof safe and hauled out the magical GM Translator EZ 2000.

Just in case you've forgotten what this little baby does, we feed it actual quotes from actual NHL general managers/team presidents/coaches/whoever makes the horrible draft choices on Long Island and the machine deciphers what the the person actually meant to say. I hope it's in a good mood today. Do not taunt GM Translator EZ 2000.

In a story in the St. Louis Post-Dispatch earlier this week, Davidson talked about the needs at goaltender in the organization. Davidson is a former goaltender himself. I'm sure he's got a lot to say. We feed the quote into the machine like so...

"He's the guy right now," Davidson said about current starter Chris Mason. "I want him to have the mind-set that he's the guy. Chris is a very well-respected member of our team, and that's important. We expect Chris to get the job done."

Well that's interesting considering that at this exact time last year Emmanuel Legace was the starter, the team needed a backup and they traded for Mason. And the Machine (I can kind of feel it watching me type, so I don't want to disrespect it him) says this is what Davidson actually said (allegedly):

Look. We learned our lesson. You think I'm going to ruin another goaltender in the last year of his contract by trading for a guy who makes more than the first guy? Hell and no. Goaltenders are flakes. Ask my wife. We're not going to spend a lot of money on a backup who could wreck the starter.

So anyone hoping for Josh Harding or a surprise trade for an established guy on a team with cap problems, keep dreaming. Oh wait, JD kind of says that too:

"It all depends on what's out there and what the price is," Davidson said. "We're not going to go out and sign a $6 million goaltender. What we have to do is see if a trade makes sense, or if free agency makes sense. There's lots of guys (in free agency) that are backup goalies. You can't get caught without one."

Have I mentioned I love this Machine? I do. I'm hugging him right now.

Up next, another JD quote from the Post, this time talking about the Blues' recent track record in drafting quality players.

"I'm really happy with what Jarmo and the guys have done," Davidson said. "We've had more picks than most teams, especially first-rounders, the last few years. We just want to do what's right ... do it patient, not impatient. It was a process to get to where we are today. I like what they've done, and I think one of the main things is, the character of the Blues is strong, and our city recognizes that."

The Machine is making a noise like that one is a little more problematic. The printout...is taking a few minutes. This one could be interesting.

The bald guy from Sweden has really kept me from making many mistakes in free agency, and for that I'm thankful. Glenn Sather wishes he was so lucky. But drafting in the lottery and having more picks because of trading guys at the deadline, that shit is easy. The degree of difficulty goes up when we only have one pick at No. 17 in the first round. So they're not going to draft a moron with a rap sheet. We want a choir boy so that even if he sucks, he sucks quietly and not on Peoria's version of TMZ. Did I mention Erik Johnson will be back and that TJ Oshie is so darn lovable?

Remember, this isn't me, it's the machine. Personally, I'm all for sticking with the grow from within strategy. Love it. But I can see where the GM Translator EZ 2000 would think that the front office could hind behind that and avoid making a lot of risky decisions...like signing the aged Paul Kariya for $18 million over three years.

Alright, I don't want to tire the machine out. One more quote, this time from our friend Norm Sanders at the Belleville News-Democrat talking about former Blue Brett Hull being elected to the Hockey Hall of Fame.

"He had flair for the game. He had a flair for being magical with his goal-scoring," Davidson said. " I'd sure like to find another Brett Hull. That would be great."

I think the Machine chuckled. Here's what he spit out:

Brett Hull could score goals. He sure didn't play a lot of defense. He was kind of a jerk. I hope someday we draft a guy just like him. Except without being kind of a jerk part.