What We Know About The St. Louis Blues After The 2009 NHL Draft

Share All sharing options for: What We Know About The St. Louis Blues After The 2009 NHL Draft 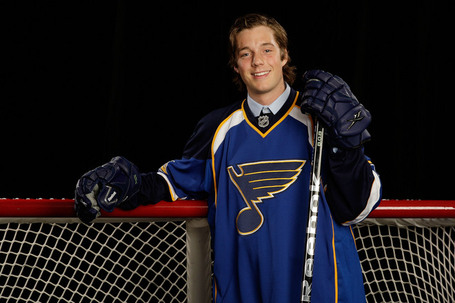 I trust St. Louis has the Ikea?

Another NHL draft has come and gone for the Blues. Fans have a whole new crop of teenaged boys to daydream and fantasize about. And now we're just two days from the opening of free agency. It's an exciting time. So in this short breather between finding players for the future and signing players for the here and now, it's a good chance to see what we know about the Blues.

Be true to your school of thought.

As the Prospect Department discussed yesterday, by taking a defenseman first overall, team leadership stayed true to their philosophy. They've drafted a defenseman in the first round four years in a row. If a forward and defenseman have similar ratings, always go with the guy who plays on the blue line. They also don't have nationality allegiance. They took two Europeans, two Canadians and two Americans. It mirrors the first round two years ago when they took three players: one European, a Canadian and an American. They don't have any obvious biases against any area which would lead to player stereotypes. It's a good mix and a solid approach, one they've stuck to.

No Chris Pronger reunion this summer.

The Flyers stepping up and overpaying for Pronger possibly does a favor for the Blues. Two first round picks and two roster players (both young and former first-round picks) was simply too much for the on the upswing Blues. Obviously he's a known commodity, a former fan favorite and the type of player with offensive skill that the Blues could use on defense -- at the right price. No wonder Dany Heatley wasn't traded if that's the market for high-priced, cap-killing talent with track records for high performance and a knack for getting traded.

We have no idea what the Blues will do in free agency.

A couple years ago I predicted the Paul Kariya signing two full days before it happened. I don't have the foggiest this year. They obviously need a cheap backup goaltender, so that won't be surprising. They could definitely use an offensive defenseman, but I don't think they have a clear target. You could always see a trade of prospects for a defenseman, but I would think the Blues want to answer a few questions. How's Erik Johnson skating? Can Eric Brewer skate at all? Will Carlo Colaiacovo decide to play another season virtually injury free? They get some positive answers, and a guy like Alex Pietrangelo or Roman Polak or Jonas Junland could be in another organization.

Getting a taste of success, ownership doesn't want a quick fix.

This relates to the first point. After a surprise appearance in the playoffs and a team showing growth and improvement from within, it's easy to think making a splash for one or two veterans could fast forward the process and make the Blues a contender much earlier than anyone expected. The franchise has done it before (Keith Tkachuk deadline deal, I'm looking at you). A division rival did it last year (Brian Campbell and his bags of money don't care if he's not on the No. 1 pairing, in case you were wondering). The Blues saw one conference final and then a return to the middle of the pack. The Hawks also saw the final four of the playoffs...and now have not one but two players making top-flight money in a salary cap league not playing top-flight minutes probably for years to come. In today's NHL (somebody should trademark that phrase), you can't afford to make mistakes like that.

No, this ownership isn't showing the impatience other rich guys have had when it comes to trading youth for experience, throwing dollars at free agents. They're in this thing for the journey as much as the payoff. Anybody ever see Dave Checketts wear short sleeves? I bet he's got a David Perron portrait tattoo on one bicep and T.J. Oshie and Patrik Berglund's numbers on the other. If he has a dog, it has to be named Lars.