Jay McKee had the distinction of being the first free agent signed by the Blues' new ownership group, SCP Worldwide, headed by Dave Checketts and his partners. In fact, McKee was signed to a four year deal on July 1, 2006, just one day after the team hired John Davidson as president of Hockey Operations.

Now, just two days shy of his third anniversary with the team, McKee has the distinction of joining a very small club: he is just the second player bought out of his contract by the team since the new Collective Bargaining Agreement has been in place. The other player with that dubious distinction? Our man, "so soft he gets picked on by butter" Petr Cajanek.

McKee simply became too much money for too little use on this growing Blues team. It's not his fault, either, because his game has not changed much since the glory days of his career back in Buffalo. The main problem with McKee is that oversized contract he was given by the Blues back in 2006. When McKee hit the market that summer, most people thought he'd end up re-signing with the Sabres, where he'd spent his entire career after being drafted by Buffalo in the first round of the 1995 draft. In fact the buzz in Buffalo, where McKee was a beloved player and member of the community, was that any offer up to about $2 million would be quickly matched by the Sabres in a "give us a chance to match your best offer" deal.

And then the Blues offered twice that amount.

As one of our friends, who was a Sabres blogger at the time, mentioned, "We were hoping to get him back, but when that contract got thrown out there [Mckee was offered $4 million a year for four years] we all immediately said, 'Bye Jay.' "

The contract was far too large and far too long, but from the Blues' perspective, they had no choice. This was a franchise that had just completed its worst season since 1978-79. They'd won only 21 games. They were hoping that Lee 'Dutchie' Stempniak could be a first-line scorer for the whole year. They had zero credibility in the league. They were effectively in Year One of the rebuilding plan. No one wanted to come to St. Louis who didn't have to come to St. Louis.

Unless, of course, St. Louis was willing to give you twice what the market thought you were worth.

The Blues did what they had to do in that situation: they overpaid to get a guy to help the team. McKee was known for being a defensive defenseman who was tough to play against. Big and mean and a great shot-blocker, he would give the defense a veteran presence and help the team hold onto tie games and one-goal games. Points were going to be hard to come by in the 2006-07 Blues season and a good defense could help steal a few here and there. McKee could help, but he'd have to be blown away by an offer to get him to leave his adopted home in Buffalo, a town where he still has a home.

And so, Jay McKee and his agent likely gave each other energetic high-fives and hugged and maybe even did a little river-dancing. It was time to go to St. Louis.

Alas, all did not exactly go to plan for the Blues and McKee. He immediately missed time in the lineup with a knee injury, a hand injury, a 'lower body injury' and a hip injury. And that was just in his first season. All told, in 2006-07 he played in just 23 games, compiling a minus-9 rating to go with his zero points. Never known for being the sturdiest of individuals (he has never played 82 games in any one season and has only topped 70 in five of his 12 NHL seasons - none with the Blues), McKee became known as 'Fragile Jay' around these parts very early in that first season. Unfortunately for all of us, he never really shook the nickname.

In year two, McKee did manage to suit up for 66 games and did score his first points as a Blues. He also managed to finish above the waterline with a plus-2 rating, finishing second on the team in that regard. (Ouch. And we were just starting to put memories of those seasons behind us.) By the time he finished his third season in Blue in 2008-09, Mckee was playing about how he had in Buffalo. He appeared in 69 games and managed a plus-11 rating. People were beginning to remark that he was playing well. His unflashy but solid style was fitting in well with the Blues' system. He seemed like he was a viable part of the blueline on most nights.

But still there was that contract.

In the end, it's the contract that led to his unceremonious dump onto the waiver wire. The Blues' current roster is built around a deep defense including Carlo Colaiacovo, Barret Jackman, Erik Johnson, Roman Polak and Mike Weaver. Alex Pietrangelo will likely get a serious look considering his juniors-or-NHL status and Eric Brewer may or may not be able to play this season. McKee with a cheaper contract is probably on that list. McKee at his current salary is just too expensive to keep around.

If (when) no one picks him up for one final year at $4 million, the Blues will buy him out and he'll be free to sign with any team that wants him. If fan enthusiasm counts for anything, the folks over at Die By The Blade would be happy to have McKee come back to their team. They know what they're getting with him and at a cost of, oh, say, half of what he's making now, they'd plug him right into the lineup to play the role of veteran leader, defensive defenseman and expert shot-blocker. Sound familiar?

If McKee had signed a contract with St. Louis for the then-market rate of $2 million, he would have been less-reviled by fans of the team. He'd have been accepted for what he was; a slower defense-first blueliner who specializes in doing the unglamorous jobs that need to be done in the defensive zone. At $4 million he was just over-priced and underproductive.

But we will say this for Fragile Jay McKee; we will miss using his nickname and we will miss the opportunity to break out embarrassing pictures that he gave us. Last summer, soon-to-be-former-Blue Dan Hinote cashed in all of the fame he could muster and married a Playboy Playmate, Amy McCarthy. In a truly baffling move, he had all of his teammates and other guests show up in 1950's garb. Fragile Jay inexplicably decided to show up as Marilyn Monroe.

Yeah, we don't know either.

So while we got to enjoy the picture when it surfaced: 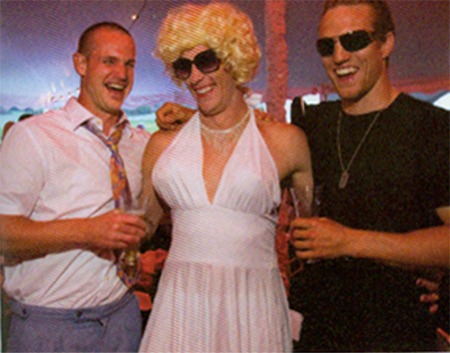 The real joy we got out of it was the Photoshop version sent by our regular reader Mr. Particle, who decided to ruin everyone's sleep by burning these images into our brains for all time: 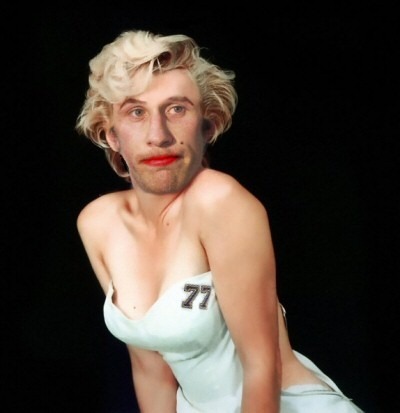 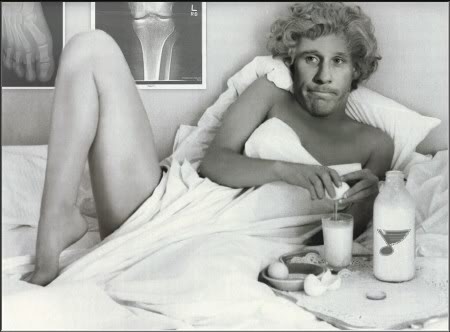 And with that, we close the book on Jay McKee as a member of the St. Louis Blues. Some have hated him, some have loved him. We will always remember him as a guy who spent too much time injured and who made way too much money on our backs. But on the plus-side, he did the job expected of him most of the time he was in the lineup. It wasn't his fault that he was overpaid by his employer -- we all wish we were getting twice what everyone thinks we're worth. His legacy as an NHLer hasn't been tarnished by his time here because his game never changed, only the expectations of him did.