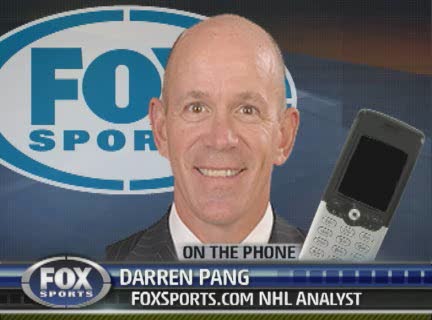 If you do an image search for former figure skater Scott Hamilton, you might find this same picture.

Darren Pang is a good broadcaster. He has built a strong resume working for ESPN then NBC, TSN and NBC on the national level while also working on Chicago Blackhawk and Phoenix Coyote local telecasts. He has more than 20 years of broadcast experience. Players seem to like him. Fans for the most part accept and respect him. But that doesn't change the fact that he played four years with the Hawks and no other team. He got his start broadcasting in Chicago. And now he's forced out of the booth into a smaller role the only Hockey Hall of Fame player the Blues organization has adopted as its own. And yet...this is a good thing.

Bernie Federko was a great player who gave Blues fans enjoyment and excitement for more than a decade. Despite finishing his career with that one hockey team in Detroit, his retired number and statue serve as reminders for his place in the frachise's history. But none of that makes him a good broadcaster. If you've seen any of our game threads, you know that Federko relies on the same descriptions and frankly excuses for players, especially goaltending. "He never saw it coming" and "He never had a chance" were two of his greatest hits.

While the man could do great things with the puck on the ice, he's not the most gifted person to describe what's happening. And his repeated admittals to not knowing what was happening with official rulings got old. The few times team president John Davidson has stepped into the booth to participate, it was clear who the progessional broadcaster was and who was still learning on the job.

Our friend OdinMercer at Five For Howling said the departure of Pang from Coyote broadcasts has more to do with the financial troubles of the team and the sale issues than the team not wanting the diminutive talker to return. From an e-mail from OdinMercer:

I’m really sad to see him leaving the Coyotes. He’s been great as part of the announce team here, but with the bankruptcy making it impossible to get the TV deal done he had to go somewhere that could pay him. He’s very knowledgeable about the game and he can be a little excitable. He’s also a big homer so expect him to be on your team’s side about pretty much everything. He’s also great with all the fans. He shows up at all the fan events and remembers the people he talked to from last time.

Sounds like Ken Wilson to me without the added dose of ego.

What's a little depressing is knowing what the first interaction between Pang and Federko will be. I can see it now. John Kelly will throw it down to Federko who will say something about welcoming Pang to the team and how he's thrilled to be back close to the action down at ice level. He'll say something about the speed of the game and the skill of the players. And when he throws it back upstairs, he'll talk about a game he played in against Pang and make a joke about how small he was in net. Pang will laugh because short jokes don't bother him anymore. And then he'll offer to bury the hatchet so to speak with his ties to the Hawks and that he's ready to be part of the team and a true Blue. It'll be witty as hell.

It's an interesting move that shows there are few sacred cows in the organization. And if you look at the retired numbers in the rafters, other than the guys who got banners after they died, Brian Sutter had a bitter divorce from the team, Brett Hull was allowed to walk away and went to work for Dallas and now Federko is getting what amounts to a demotion on the broadcasts. That leaves only Al MacInnis who still works in the front office. For now.

So Blues fans, any other thoughts on Federko or Pang or even Wilson? Tell us in the comments. And we'll have more reaction from around the league with thoughts on Pang in another post. Because I have to work instead of attending the prospect puberty camp. And this is easier than writing about 19-year-olds I know nothing about.