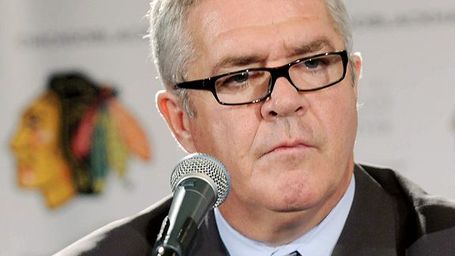 I personally scouted them and I have faith these are in fact men's glasses. Next question.

Man, one day you predict a team finishes first in the Central Division, later that same day, that team fires its general manager. Welcome to the new NHL?

According to that second link, the Blackhawks fired Dale Tallon late Monday night. Not very often will a general manager get his team to the Conference Finals and then that summer get fired. Wonder if it had anything to do with mailing the qualifying offers to the team's restricted free agents instead of faxing them. And I wonder if it has anything to do with the 12-year contract the team gave along with nice contracts to secondary players, pretty much gambling that the salary cap doesn't go down enough next summer to make the young stars on the team unaffordable when they hit restricted free agency status. Maybe Tallon promised to send the paperwork by Pony Express next season.

What an odd situation. This coup was pretty much created by advisor Scotty Bowman who's son Stan Bowman is now taking the reigns as GM for the Hawks. Now if that's not all kinds of fucked up, I don't know what is. Our friends at Second City Hockey explain.

Let me say I know nothing of Stan Bowman.  I don't know what his exact role is, how much influence he has and whatever else.  From everything I read, he's the cap-ologist, so if you're miffed at the Hawks cap situation, wouldn't Stan be just as responsible for it as Tallon?  What the Hawks have done here is put what they think is "their guy" in an absolute no-lose situation.  If the Hawks go on to win, it'll be Stan shown on TV hugging everyone in the skybox, even though Tallon did all the work.  If it all goes pear-shaped, Stan can throw up his hands and say, "This is what I was left with, what do you want me to do?", or as it's known around here, pulling a Piniella.  It's gutless and cutthroat.

Sweet. So let's take a quick run down of the front offices of the presumed top three teams in the Central Division. You have the Wings up against the cap with little to no wiggle room, a couple of long contracts and an aging Niklas Lidstrom who is the super glue holding that team together. In Chicago, you've got pandamonium. They're looking at cap issues next season. They make the splashiest move of the offseason and then fire the guy in charge of it. And the blog dedicated to the Hawks just compared the organization to the Cubs. And then you have the Blues who are run by a former TV color announcer with no management experience, a lame duck general manager and his replacement moving in on his turf. And yet we haven't written a single word about turmoil in the front office at the Drinkscotch Center. Amazing. To go from Bill and Money Laurie to this is astounding.

I suggest you pop some popcorn, get comfortable and watch the spin job Tuesday coming from the Windy City. It'll be great!