Some Stuff To Pass The Time

Share All sharing options for: Some Stuff To Pass The Time

Not much hockey news coming out of St. Louis (or anywhere else, really), so I thought I'd contribute a bit with a some translated stuff. Swedish sports site svenskafans.com recently published short interviews with Blues prospects Jonas Junland and Lars Eller. Both hoping to make the team out of camp. We'll see how they do in just a few weeks. In the meantime, here's something to read for us poor hockey-starved people. 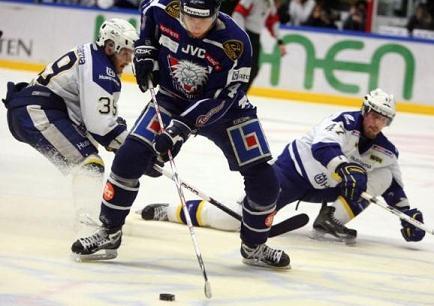 Jonas Junland during his days as a Swedish Elite League player.

Link to original article (in Swedish).

You have lived in the U.S. for a  year now. What kind of city i St. Louis, and how do you spend your time when you're not playing hockey?
--I think St. Louis is a great city, maybe a little too big but there's always something to do. I've also spent a lot of time in Peoria which isn't as fun. When I'm not training I play golf and go shopping, I find it relaxing.

You just bought a Chevrolet Tahoe. What's it like to cruise around in one of those?
--I'm very pleased with my new car. Maybe it's a little too big, but I need it since I have a big dog that needs room. It's a Chihuahua [laughs].

Your first season in the AHL and you got to play in the All Star Game. Compare the AHL to the Swedish Elite League.
--There are some differences, definitely. I think skill-wise that the SEL is  better, at least individually. But the tempo is definitely higher in the AHL. Plus, you have to learn the North American style to be a good player over here, and the AHL is perfect for that.

Which other players in Peoria have been impressive and could get call-ups to the Blues?
--There's a whole bunch of players who has a shot at making the Blues, but it's really hard. I think Ben Bishop and Cam Paddock are among those with a good shot.

What are your thoughts on getting a spot on the Blues line-up, and how will you approach playing in Peoria another season?
--I think as little as possible about that, but of course I'll give it everything to get a spot with the Blues. If it's back to Peoria for me, I'll deal with that then.

Eric Brewer is the Blues captain, but often Keith Tkachuk is mentioned as the big leader on the team. How is it, and what is Tkachuk like?
--I don't really know about who's the leader of the team, but Keith is a wonderful hockey player and from what I've heard he takes care of the young guys on the team in a good way.

From what I've heard, you've become quite the baseball fan while living in St. Louis. Albert Pujols is my favourite player. Yours?
--Baseball is a fun sport, I don't know all the rules yet, but Albert is definitely the best. 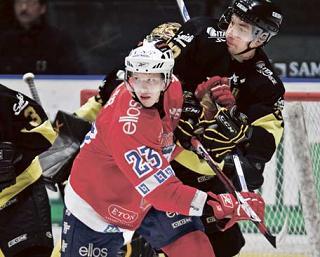 Lars Eller while playing for Boras HC in the Swedish 2nd league.

Link to original article (in Swedish).

How was it to be drafted by the Blues and what did you know about the club before that?
--It was great! The Blues were the team that showed most interest in me. I have a hard time picturing a better place to end up, everyone in the organization is great. I didn't really know all that much, to be honest, just that they had had a rough time the previous couple of years, but that they were in the middle of rebuilding the team from within.

How are you preparing for the upcoming camp?
--We are doing four work-out sessions and four on-ice sessions every week. On the ice we're mostly focusing on skating and conditioning. Basically all the players are here, except some who are attending Olympic camps.

How's the shoulder?
--It's getting better. I don't feel anything in the weight room or on the ice. It's almost like getting a completely new shoulder. Now it's about getting it gradually ready for contact. Chances are very good that I'll be able to compete at the camp and play some exhibition games in September.

David Perron had a great camp a few years back and got a spot with the Blues. What do you feel about your chances to grab a spot in the NHL and getting to play the opening games in Stockholm?
--The only thing on my mind is grabbing a spot on the team going over to Sweden. I'm not going to speculate on my chances. I know that for me to get a spot I have to be better than at least one other forward. That all comes down to how well I do in camp.

Who amongst the Danish players, besides yourself, do you think have the brightest future in the NHL?
--If I have to pick one player I have to say Philip Larsen (Dallas prospect, played with Eller in Frolunda and Boras here in Sweden). He's got it all. I also like Peter Regin (played a few games with Ottawa, nothing fancy) alot. He's a very smart player who I think will be an NHL player for many years.

How do you like St. Louis and how do you spend your spare time?
--The more I see of St. Louis the more I like it. It is a little too hot for me during the summer, though. But it's a great sports city. A big city, but mostly people seem very calm and down to earth. Me and my roomie Aaron Palushaj play golf almost every day, and if not I usually spend my time by the pool or going to the movies.