Part One: A Different Kind Of Wrist Shot

It was clear to me at the time that someone wanted me out of the way...permanently.

Oh, we played the thing off as an "accident" to keep the big artillery of the cops in the dark, and the college educated pinheads at the Post-Dispatch will believe almost any damn thing you tell them. Hell, they still think Bryan Burwell knows what he's talkin' about. But when the parking brake on my golfcart failed on the 5th hole while I was half in and half out of the stupid thing I knew the truth.

I was a marked man. 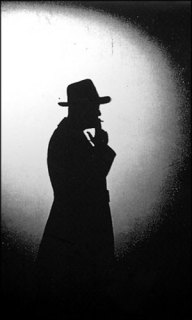 Who am I? I'll tell you. I'm Erik Johnson, part-time hockey player, full-time bad ass and, if you've got the cash, a private detective. I'm known as the hardest dick in the world. You mugs got a problem with that?

I didn't think so.

After the accident the team wanted me to see their docs, but I told them no dice.

"Don't worry about it, Johnny boy. I know a guy who can fix me up good as new."

Davidson seemed uncertain. "Why not use our guys? They got a good track record. Hell, they've never even consulted for the Cardinals."

I held firm. "Listen up. Until I know what's going on I trust nobody. You hear me? Nobody. Someone went to greats lengths to put me on ice this season, and until I know 'who' and 'why' I'm not letting any quack cut me open or put me under, unless I know them backwards and forwards."

Davidson merely glared as I rolled myself out of the room.

Yeah, my exit would have been cooler had I not been in a wheelchair, but what the fuck was I supposed to do about it at the time?

I took the elevator down and was met by my driver in the lobby.

"Right, sir!" said Campbell with enthusiasm. He was an experienced pug that Campbell. None too bright maybe, but he knew his way around the business end of a hockey stick or a .38. And at that point I needed someone I could trust.

As we drove I tried to read the impression of Davidson from the early afternoon meeting. Had he pressed a little too hard for me to use the team docs? No, I decided. He was just being a good organization man, but that didn't mean someone else close to him might not be playing him for a sucker. No, I'd stick to my own resources for the moment.

We were in the Hill now, the close knit Italian immigrant community where Yogi Berra learned to mangle the English language, and where I was about to undergo surgery. Around the corner from the famed Amighetti's Bakery Campbell stopped the car at a non-descript house flying the Italian flag. We were expected and a man quickly exited the house to meet us.

"Keep you voice down! You want the whole neighborhood to know what we do in here?" Gino Cavallini was always the more excitable of the boys. I was certainly glad it was Paul who would be wielding the scalpel. "Anyway," Gino continued, "Paulie will be back any second. He just went down to Vito's to pick up a pizza."

One eye roll later I made my way, painfully, up the steps and into the house. Paulie showed up about five minutes later carrying two pies. The smell of extra prosciutto filled the house. The Italian ham wasn't on the menu for regular Joes, but the boys knew how to get things done in the Hill.

"Hey Johnson, you're already here, eh?" said Paulie dropping the pizzas on the nearest Formica counter top, "You want a slice before I slice?"

I stared hard at him and he flinched like a puppy threatened with a phone book. "No I don't. And wash your hands before you get cutting. You don't know where Vito has been."

I hobbled into the 'operating' theater set up in the extra bedroom and waited.

I'm not sure when Paul Cavallini had started the whole underground surgery racket, but he always made a lot of extra scratch from his little sideline. Not that he didn't pay a price as well. When he scarred a important man's moll in a botched face lift back in his playing days, the miffed Don exacted his revenge by having the tip of Paul's finger cut off with a rusty hedge trimmer. The organization had to pay a small fortune to rig Paul's glove with a squib and cow's blood so he could have an "accident" his next time on the ice. After that Paul never cut the dames. "No guy ever cares if I make him uglier" he always said.

When he came into the room he was all business.

"Alright Johnson, I'll have Gino put you under now."

"No you won't. I'm doing this sans gas. I trust you to cut me, you butcher, but I want to have my wits about me. I'm going to stay alive until I figure out what is going on, and long after."

He chuckled. "It's your funeral, man." Turning to Gino he said, "You can go in and eat some pizza, I guess." His brother exited.

Paul picked up a knife and bent over my presently useless knee. As he cut into me he said, "You can yell if you feel like it."

Paulie grunted and got to work in earnest.

It took four hours during which time I invented elaborate tortures I would inflict upon the villain who did this to me....if and when I caught him.

And then it was over.

"You're done," said Paul. "Your knee ain't gonna win any beauty pageants, but you should be ready to go by the time the oh nine, ten season begins."

I grimaced at the thought of a entire season lost, and a little at the pain of my throbbing leg, but all I said was, "Thanks. I owe you one."

"The hell you do," said Cavallini. "Where's my money?"

"Heh. It's always the same thing with you ain't it, Paulie."

"Hey, pasta with red sauce doesn't pay for itself."

I called Campbell into the room and he produced a wad of tightly bunched Franklins.

"Whatever. Jimmy, let's get out of here."

They had to use the wheelchair to get me to the car as my freshly carved leg kept me from even being able to hobble. I bit the inside of my mouth to fight through the pain and was treated to the taste of my own blood.

"Someone is really going to pay," I promised aloud, not for the first time.

"What's that, boss?" piped in Campbell over the front bench seat.

"Nothing. Let's go home. No...wait." I stopped myself. There was no way I was going to be able to sleep with this bum leg, and I couldn't sit through another night of cable TV. "Let's go to the office."

"You got it," said Campbell sliding the Lincoln into D.

My office is a loft down on Washington. Its where I do my heavy thinking, as well as where I keep boxes of my "Extra Well Hung" prophylactics, if you catch my drift. Tonight, however, I didn't have a broad on my mind.

As we swung into the light evening traffic on 40 at Kingshighway the black Audi that had been following us suddenly shot forward. I could see the tinted windows begin to drop, and then the silhouette of a gun barrel.

At that point, several things happened at once. Campbell slammed on the brakes of the Lincoln, while my unbuckled frame doubled over the front bench seat thrown forward by the attempt to stop. At that moment the window by Campbell's head exploded into a million pieces, though neither of us ever heard the report of the pistol. As glass shards entered Campbell's eyes he reflexively grabbed at them throwing the car in a hard right turn at 30 mph. It was too much to ask of the car and it flipped, once, twice and a third time, coming to rest on its hard steel hood.

Somehow, I wasn't thrown from the car. I found that I was lying prone, bruised and battered, but alive and kicking. My head hurt like hell, and the world was swimming before my eyes, becoming as faint as Mike Weaver's Norris Trophy chances. Campbell was hanging, unconscious or dead, from his safety belt. Blood was streaming from his left eye and dripping onto the ceiling of the car.

I turned and looked out the passenger side door now facing forward down the road and saw that the Audi had stopped to see the aftermath of the accident. I heard the sound and cries of approaching good Samaritans, and the Audi peeled out and sped away, but not before I spied it's liscence plate.

Just before I passed out I had but one thought.

Why would Brett Hull try to kill me?