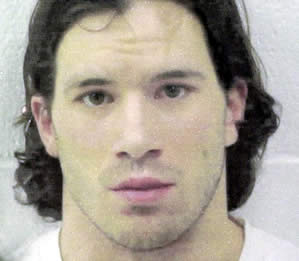 In 2004 Mike "Don't Call Me Jefferson" Danton was sentenced to more than seven years in prison for attempting murder for hire. Earlier this year he was moved to Canada to finish his sentence. Friday we learned he's been granted a full parole. Make sure you adjust your penal league fantasy draft lists accordingly.

We've written about the fact that Danton is still close with his agent, David Frost -- you know, the target of the failed murder for hire plot that landed Danton in the penitentiary in the first place. You've probably read the stories about how Frost drove a wedge between the player and his family and how Frost was accused of abusing youth players in Canada and how Frost shouldn't be allowed to associate with hockey at any level ever again. All of that has led to this: if the former NHL player named Mike Danton ever hopes to be happy in his adult life again, he will run far, far away from Frost.

Let's pretend Mike Danton will read this some day. Mike, first of all drop the last name. It would be a symbolic way of breaking ties with Frost. Go back to your family. Make amends. Forget about the NHL. Forget every word Frost has ever said to you. File a restraining order. Make him keep his distance. Never call or e-mail or text him again. When you played with the Blues, a lot of fans came to enjoy your tenacity and strong spirit. Continue exemplifying those traits by making the right decision for yourself and never assoce with that man ever again.

Good luck Mike. Something tells me you'll need it.

UPDATED: Dude is still screwed up. A few choice exerpts from the wire story are after the jump. Some more screwed up stuff.

Apparently Danton was taking an odd mix of stimulants and sleeping pills and became paranoid. He hired the hitman for $10,000 because he thought someone was coming to kill him.

Why on earth would you believe that?" board member Michael Crowley asked. "That's like talking about the bogeyman."

"Over the years there were conversations that pointed to someone who would have interest in ending my life and ending [Frost's] life," Danton said, adding he received "verbal confirmation" from a family member.

He told the hit man to kill someone who would be in his apartment over two days, and Crowley noted Frost was there at the time. But Danton said Frost wasn't the person he believed was coming to kill him.

"It's clear that you thought it was your father who would do you harm," Crowley said.

Oh, and I don't think he'll be taking our advice about patching things up with the family.

Danton said his childhood was dysfunctional and his relationship with his parents, Steve and Sue Jefferson, became so strained that he changed his last name from Jefferson, hasn't talked to his father since he was about 15 and admitted to tearing up and sending back the letters they wrote to him in prison.

When Frost became his coach at age 11, Danton clung to him as a father figure. He said Frost has been unfairly portrayed in court testimony and in the media as a violent, controlling, all-encompassing presence in his players' lives.

And finally, two of the terms of his parole:

Conditions of his release specify that Danton is to have no direct or indirect contact with his father and no face-to-face contact with Frost, unless preapproved by his parole officer.

So in other words, the guy can't and doesn't want to go back to his father and his surrogate father is barred from seeing him without permission.