I'm one of those hockey fans who came to the game late. Without re-hashing my whole history (which you can find elsewhere on this site, I'm sure), due to a serious oversight by my parents, I was not properly introduced to the game of hockey until I was in my early 20's. That particular moment in time also happened to be a portion of history known as "before the internet was useful." Which, obviously, seriously hampered an out-of-towner's ability to grow his knowledge of the game and its players.

Being in Columbia, Mo at the time, I had no great way to learn more about the Blues, their players, how the game was played and what other teams and players were good. Boxscores from the paper the day after the game were not enough. So I did what hundreds of thousands (or maybe just hundreds or thousands) of us did: I turned to video games to teach me about hockey and the NHL. Not only was it a great way to learn more about the game, but it was an even better way to get ready to go out on a Friday night. 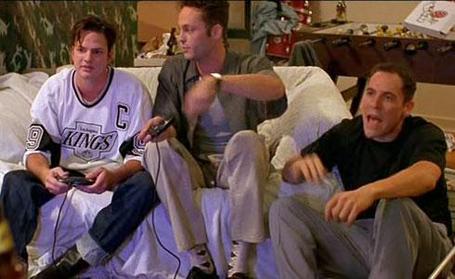 No one I knew would have worn that Gretzky jersey to go out, but I did know guys who rolled their jeans like that....

I switched from playing whatever version of football we were playing to the NHL game that was available. Those brain cells are long since gone now, but I'd have to guess that it was whatever game was available in the EA family at the time. (I seem to remember a wrap-around goal move that was fairly effective, though.) Over the course of the next couple years I used video games to help me learn which teams were good (Pittsburgh and Chicago always seemed strong), which were not (Oh, Ottawa, what a mess) and the fact that once you got good at the game, it was fairly easy to make the Blues a juggernaut that could not be challenged by anyone.

Over the subsequent years I learned more and more about the NHL and the Blues through a subscription to The Hockey News (a magazine that nearly made me shit when I first stumbled onto it in the high desert of California, but now seems hopelessly behind when it comes to spreading actual hockey news), a subscription to the Center Ice package when I lived in Cali and in Virginia, and, of course, the emergence of the internet.

But always there was the video game.

The NHL game was the only one I bought when I got my first Sega Genesis and it has long been the first game I buy when I upgrade my gaming system as it was when I got the Playstation and the Playstation 2. However, I did not grab a copy of the current game when I bought my XBox 360.

Why didn't I get it for the XBox, you ask? Why did I give up on the video game NHL? It's a simple answer, really.

I simply knew myself too well, and I knew that I just don't have the time any more.

I'd bought virtually every year's version of the EA Sports game (sorry NHL 2K series, but I got yours one time and the shit was so buggy I nearly went on a rampage) from about 1996 until 2005. Then, after the lockout, I got the crazy idea to start a game-day hockey paper based on a recently deceased game-day hockey paper known as the Game Night Revue. Whatever spare time I had during the hockey season quickly went the way of Katie Wolfmeyer's career prospects as a criminal mastermind.

Buying a NHL video game during the actual NHL season would be way too tempting for me. Even when the Blues aren't playing or happen to be out of town for a couple days, the Game Time machine constantly needs oil. If I'm spending a couple hours leading the Blues to yet another virtual Stanley Cup then the machine isn't gonna get its oil and it'll start getting squeaky and rusty. Then, by the time we get to the offseason, NHL Oh-Last Season just isn't as compelling of a purchase. Hell, the NHL 09 roster didn't even have T.J. Oshie and Patrik Berglund on it. Plus, Roman Polak is wearing Barclay Plager's No. 8. And that just is not right.

Why would I want to play that all summer?

And then Brad Lee decided that it'd be a great idea to bring his copy of NHL 09 over to the Game Time Headquarters for the staff get together we had just a few weeks ago. What a great idea, I thought. A bunch of hockey nerds hanging around, no games to watch... sure, bring the game and maybe people will pick up the sticks and play some games. Unfortunately, that's just what happened. And sometimes when a guy who is a pseudo hockey cartoonist for a game day hockey paper doesn't have the sense to maybe take it easy on a certain 8-year-old son of a game day hockey paper publisher and proceeds to beat the virtual tar out of him in game after game, that can lead to places that no one anticipated.

Brad Lee, aforementioned owner of said game, decided that it'd be a good idea to let the Son of GT borrow the game for a few days. And while, yes, that was a good idea because 1. Son of GT was more mature about his virtual NHL beatings at the hands of an adult than the adult was and 2. Brad Lee is a good dude who knows that a kid would really appreciate that.

However, Brad followed that up by completely screwing me over. He did so with one innocuous email. All it said was, "You should check out the Be A Pro mode. You start off in the minors and work your way up."

Until that moment I had done a pretty good job of resisting NHL 09. I played a couple games solo and I had played a couple games against the Son of GT (and, unlike a certain 'cartoonist' I didn't select the Pittsburgh fucking Penguins after he selected the Blues). The game was as fun as I'd remembered and had improved some since I'd last played, but overall it was resistible. I could actually envision having a copy in the house and not worry about playing games when I should be working on GT stuff.

Until that email. Until the Be A Pro mode entered my life. Until Be A Pro started to devour my spare time. Now I'm worried.

Seriously, I need this thing out of my house. Before the season starts. For real. I find myself thinking about the crappy game my player had in the last one before I turned off the system the night before. Or actually, before I turned it off earlier this morning.

For those who don't know what it is, Be A Pro mode allows you to make your own hockey player and determine everything about him. You name him (mine is named Zack De La Rocha). You define his role (power forward). You pick his look (pretty close to the namesake), his gear (Warrior stick, Easton skates, Eagle gloves, all much like someone I know uses during his own rec league games) and his number. Then you pick his pro team (Blues) and he is assigned to that team's minor league affiliate.

When you play Be A Pro, you watch from the bench when your player is off the ice and you control him when he's taking his shift. If you play well, you move up onto better lines on the team and work towards a promotion to the NHL.

As I mentioned, it has become a problem.

I've been able to avoid the NHL Oh-Time Sucker for years now. Now, thanks to Brad, not only am I addicted to last year's version, but I'm also finding myself noticing every electronics store and game shop in town. As many of you surely know by now, NHL 10 was released yesterday. I've seen the commercials. I've seen the demos. I've seen the list of improvements. And I know it's just a matter of time before I'm holding a copy in my hands in the XBox aisle of the store, turning it over and over in my hands.

And I'm going to have a problem on my hands.

But, you know, now that this article is done... I do have a few minutes of free time... and young Mr. De La Rocha could use a big game against that lame-o Blue Jackets squad....