Share All sharing options for: Blues Screwing Up FanFest 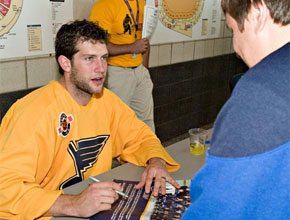 Sure I'll sign your poster, but why do you want me to write Chuck Norris?

Saturday afternoon the St. Louis Blues' FanFest returns for the third preseason in a row. The first two were pretty darn successful judging the turnout. But this third incarnation is different. And while we probably can be accused of always hating change, we've got a good reason to not like how this thing is planned.

The last two seasons the Blues have thrown this event to coincide with the first scrimmages on the ice for training camp. It was a nice nod to the beginning of hockey for the next several months. The day would start with stuff on the ice before players came out on the concourse to interact with fans, take photos and sign some autographs. And while you can debate the merits of adults getting 20-year-old Europeans make their mark via Sharpy on a puck or jersey, people liked it. The thing was free. Season ticket holders got access to coach Andy Murray for a Q&A session. I think there might have been some free food and stuff last year. There's stuff for the kids. It was cool. The Cardinals and the Rams never do stuff like this.

Did I mention it was absolutely free? Well in the past it was free.

This year it will cost you $10 a person to get inside. There's still autographs and kid stuff and all that. You can even get the chance to see how much taller you are than new TV analyst Darren Pang! And instead of a scrimmage, you get to see a real-life preseason game. Sounds great, right? Not so fast.

First of all, this event is a week late. It should have been on Sunday when scrimmages started. It should celebrate the start of the hockey calendar, something that recognizes all the players have returned from their lake cottages, the smell is back in the dressing room and the trip to Sweden is right around the corner. The Blues will have played two preseason games, so even the excitement of seeing them suit it up and drop the puck is gone. And those two preseason games will be played in a half-empty arena. And that's why they're doing it this way.

If you go to FanFest (and please, go if you'd like, it will still be fun), you're basically buying an upper-bowl ticket to the game and the other stuff comes along with it. If you want to sit in the lower bowl, it's $30. And that's all you need to know about this thing.

Somebody in the Blues' ticket office said, "Man, our preseason games are selling like Rams tickets. We need something to juice it up!" And he or she decided to tie FanFest to a ticket promotion. The first exhibition Tuesday night drew less than half of capacity, according to a source inside the arena camouflaged as an empty seat. I'd bet Friday night's game will be the same. So I get why they'd want to do it. But that doesn't justify it.

What used to be a pure fan-oriented event has now become a way to put butts in seats for a meaningless game. Not cool.