No Big Surprise: Blues Seen As Underdogs In Sweden

Share All sharing options for: No Big Surprise: Blues Seen As Underdogs In Sweden

Today, on my way home from work, I stopped by the grocery store to pick up some toilet paper food etc. As usual, I came home with lots of unnessesary items, among them a newly released hockey magazine focusing on the upcoming Swedish Elite League start, with quite a few pages on the 09-10 NHL season.

The magazine, humbly named The Hockey Bible, is released by Aftonbladet, Swedens biggest and most successful newspaper, and is a guide to everything hockey (or so they claim). I personally bought it just to have something to read on the shitter.

Anyhow, after having glanced through the Elite League pages of the magazine, I came to the good stuff: the NHL Premiere games in Stockholm between the Blues and the fuckoffs of Detroit. Well, let's just say I was not happy about how the paper's editors chose to illustrate the premiere matchup. 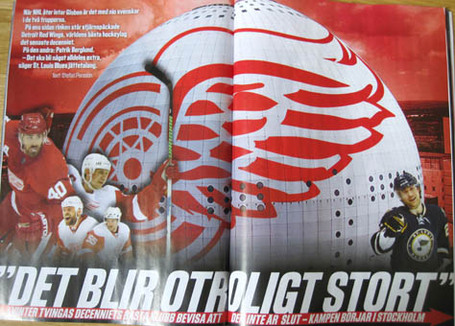 Notice the Blues content on this page? A whole square inch in the bottom right corner! Looks like an equal fight, doesn't it? Iceberg all alone against a gang of Red Wings players and a winged Globe Arena. 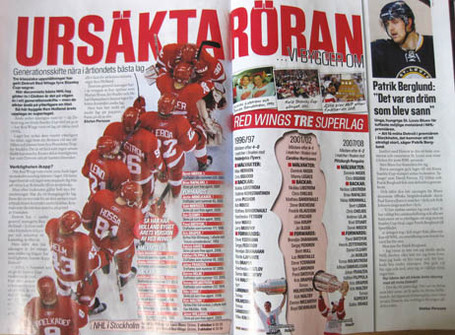 Again, small column to the far right. The rest is all Red Wings. Fuckers.

Not that I expected anything else, especially not from the Swedish main stream media. This is just one of many examples of how the media over here feels about the upcoming Stockholm games. According to most Swedish reporters, facing off against the Red Wings is like facing off against the second coming of the Big Red Machine (you know, the Soviet line of Fetisov, Kasatonov, Krutov, Larionov and Makarov who embarrassed opposing players on a nightly basis) or something. Never mind that Detroit's lost some very good players, never mind that they have one of the leagues most overrated goalies, never mind that they are one year older, slower, uglier. No no, it's the Red Wings, they are just great.

Oh, it's not like the magazine hates the Blues or anything. They do see them finishing as high as 8th in the Western Conference this upcoming season. Who they think will win it? Take a wild guess.