How The Blues Should Select The Final Two Defensemen

Share All sharing options for: How The Blues Should Select The Final Two Defensemen

As far as we can tell the Blues are down to their pick of four defensemen for two spots on their roster to start the season. There has been some speculation the Blues have made their decision. When they tell the players their fate, they should spice it up. They could even broadcast it.

With that in mind, we now present Andy Murray, the Bachelor Coach looking for the two defensemen that will complete his roster...and his life. 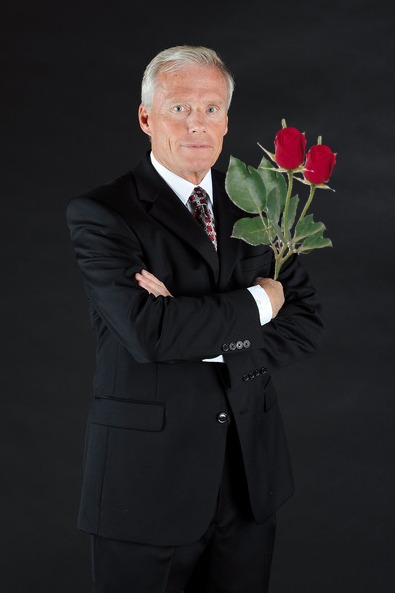 I'd like to give you this rose as a token of my roster spot I have just for you.

Andy Murray: Well men, it's down to you four: Jonas Junland, Alex Pietrangelo, Tyson Strachan and Darryl Sydor. Two of you will be sent away, shut out of my heart until someone gets hurt or pisses me off. And two of you...two of you will get these roses and join me on the roster of the 2009-10 St. Louis Blues.

Now I know we've had some quality time together taking a steam in the sauna, having pizza at  the postgame buffet and many other moments where I was either hoarsely yelling at you or patting you on your ass. I've formed a bond with all of you. Each individual has performed well during the immunity challenges, especially after we joined the tribes. Let me run down how I think you men have touched...my hockey team.

Young Jonas, I've told you I enjoy watching with the scouts the tape late at night of those young teens in Sweden do their thing. You remind me of those nights. I've seen your potential. I like your instincts, you have a heavy shot and you could man the point on my power play some day soon. But there's the language barrier. I tell you we're going to skate laps for 7.2 minutes and you look at me like I said "We're going to skate laps for a couple minutes. However long you want, you lovable skamps!" So that communication barrier, it's just too much right now. Try Rosetta Stone. I'm sorry, but the Tribe has spoken, you are the weakest link. Enjoy Peoria. Again.

(Junland drops his head, skates off the ice muttering something about terrible tasting herring in Peoria)

Alex. You were our first round draft pick a year ago. We gave you a chance to make the team last fall with a tryout, but as we both know you were still too young and raw to make the jump. So back to Juniors you went. And now here we are a year later, you're almost not a teenager any more. You're a man, but are you the man to patrol my blue line? I don't think we've seen the extent of your potential with the puck and in your own end. I've liked your skating ability, your vision on the ice and your effort. Alex, I love your effort.

I just don't know. You're young. We're not going to always get along. I listen to CCR, you lisent to Coheed and Cambria. There will be nights I'll hate you. Other nights I'll just want to hold you tight and keep the Todd Bertuzzis of the world away. I think I might come to resent asking this...but Alex Pietrangelo, will you take this rose and continue to rock my world? Will you be my sixth defenseman?

(Young Pietrangelo nods, skates forward and engages in a long, passionate hug with his coach before skating toward the Blues' dressing room.)

Well Darryl and Tyson, you can see I have just one rose left. One of you will join me in the dressing room, the other will hit the road. Tyson, you brute. You're big, you're scruffy, you like to drop the gloves. In our end, you bang with the best of them. You like to play the body hard in the corner making it tough on the other team. They are all the kinds of qualities I'm looking for in a defenseman. But your skills with the puck leave something to be desired. I lived with Jay McKee on my team and he treated the puck like a grenade with the pin pulled. So I can probably look past it, but you would learn new curse word combination because of it.

Darryl, you know I like a veteran presence in the dressing room, on the team plane, in the tight confines on the bench, buying Perron beer at the hotel bar. I like to know I don't have to teach a guy how to shift the defensive assignments around as the puck goes bhind the net and how the defensemen are the key to getting the puck into the offensive zone. But damn, you're an old man. I didn't have any gray hair when you joined the league more than a decade and a half ago. How man freaking teams were in the league when you joined? But I told you the other night in the wirlpool that I wouldn't hold you gray chest hairs against you.

This has been one of the hardest choices I've had to make during my tenure as head coach of the St. Louis Blues. I think I can be happy with either of you...but I will give my final rose to...Darryl. Will you be my seventh defenseman?

(Sydor wipes his eyes, gives Strachan a consolation hug and then skates toward a weepy Murray.)

I'm sorry Tyson. If Weaver sucks, I'll e-mail you a rose in Peoria.

(Murray and Sydor skate toward the dressing room as the arena lights fade to black...leaving the only the sounds of a sobbing Tyson Strachan.)