Going To Sweden: Are The Blues Making A Mistake?

Share All sharing options for: Going To Sweden: Are The Blues Making A Mistake?

When the Blues announced that they had officially been tapped as one of the NHL's four choices to start their seasons in Scandinavia, management was predictably excited. And why not? For starters, the team gets to double-up on dollars for the game, as they'll receive a nice payment from the NHL to offset their lost home game dollars, plus season ticket holders were also charged for the 'home' game that will be played in Sweden. (Of course, season ticket holders were appeased with extra tickets to two games to offset the lost home game, but, strangely, I didn't see any weekend games against the Red Wings on the list of available dates... guess the Panthers on Halloween will have to suffice. Maybe I'll clone myself and my kid and we can sit in both sets of seats I now own for that game.) 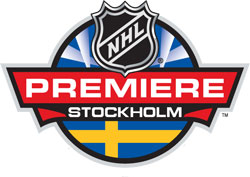 If it's got a fancy logo, it must be worthwhile.

But beyond that, the Blues get to take their young, exciting team to Sweden and hopefully make a whole wave of new fans. Fans who will, you know, go online and buy new Blues shirts and hats and jerseys and who will then continue to follow the Blues for the rest of their lives, continuing to buy more hats and shirts and jerseys.

But the best part, management must think, is that it raises the level of awareness and (hopefully) respect for the team among the existing fans of the NHL. The team will obviously get a lot of play on the NHL Network and the NHL website and among the various websites and whatnot that cover the sport as they are playing in an exotic locale. Clearly, a lot of dollars and marketing genius brainpower have been poured into this event. The franchise can only grow and gain from this event, right?

First of all, this is the third year in a row that the NHL has started their season with a few teams overseas in games that actually count. Do you remember any of the four that started last year in Stockholm and Prague? The only one that we could remember before firing up the magic system of tubes known as "Google The Wizard" was the Tampa Bay Lightning. Unfortunately, the only reason we remembered that is because the Lightning owners openly admitted that they wouldn't do it again and that their team was still complaining about their European start as their season thudded to a finish.

Is that really the raised level of awareness that we're going for? We'd consider ourselves to be fairly ridiculous as fans. We'll watch almost any live NHL game on TV. We've traveled to watch our team. We've bought the gear and spent way too much company time looking at stories and stats and fake fantasy hockey teams. Other people have accused us of joining a cult.

And we didn't give two shits about who played in Europe last year.

For the record, it was Pittsburgh and Ottawa in Stockholm and Tampa and the New York Rangers in Prague. Which brings us to our next point. Any idea on how those four teams faired in the standings upon their return stateside? It isn't pretty.

In other words, of the first six NHL head coaches fired last season, four had started the year with their team in Europe and all four of those teams were out of the playoff picture when the coach was canned.

The Blues, we might remind management, are not exactly a talented, Cup-winning squad like last year's Penguins were. Or even a potential Cup-contender like the Rangers were at that point. Or even a fading but still potent playoff team like Ottawa could have been. In fact, this year's Blues team, chock full of youthful exuberance and potential, resembles the Lightning more so than any of the four teams listed. (Minus, of course, the clearly insane ownership group, lack of defense and shaky-at-best goaltending duo.)

Our point is this. The Blues are a young, exciting group of players who either

2. showed the NHL exactly what they are becoming

with their unreal run at the end of last season. We can argue whether or not they were truly a sixth seed or not over as many beers as you'd care to drink. But whether you think they overachieved or finished right where they deserved to finish, we have to ask, Why should the team jeopardize what has been built over the last few painful years with a shitty PR scheme like a meaningless trip overseas?

This franchise is at a precarious point of the rebuilding. Whenever a potential trade burbles up in the NHL community now the Blues are mentioned as a potential destination (Heatley, Kessel). And every time it happens the fans and management are in agreement about what to do: Nothing. The team is too fragile right now, the balance too precise, the potential to fracture what we have too great to mess with anything that extreme.

Then why, exactly, is it then a good idea to take this team overseas, travel them all over the countryside for beyond-meaningless exhibition games against European squads, have them play back-to-back games against a tough divisional team that they really need to get points against and then fly them home to try to de-jetlag themselves in time for two home games that they really need to win against Atlanta and Los Angeles?

The potential to derail a season early is very high. The only potential gain is monetary. What, exactly, is more important to this franchise?