Share All sharing options for: GT Interview: Discussing Erik Johnson with the Doctor

It was about a year ago that the bad news came down for the Blues and their fans: Erik Johnson, who was on the verge of taking on the mantle of No. 1 Defensemen in just his second year as a pro, somehow managed to hurt his knee while golfing. And not just "hurt" his knee, we all were to learn, but more like "decimated" his knee. Also, trage-comedically, we were to learn that he didn't just hurt his knee golfing, he did it in some sort of Caddyshack-esque altercation with his golf cart during a non-sanctioned team-building event. Oh the hockey gods are a cruel bunch. 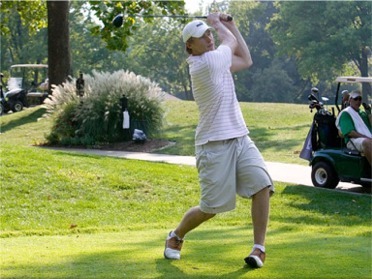 Amazingly, he didn't hurt his knee with this golf swing. Note his nemesis lurking in the background behind a tree.

After surgery to repair his knee and plenty of rehab, Johnson was recently cleared to take part in all practices and games for the Blues. But all the same, we've wondered exactly what it meant to have the team's franchise defenseman undergo such a traumatic injury at such a young age to such an important body part for a skater. We had lots of questions as to what kind of return we should expect and whether or not this would affect his long-term development.

Luckily enough, we found an orthopedic surgeon with a background in sports medicine to talk to us about Johnson, his injury and his long-term prognosis. Unluckily for him, the good doctor decided to actually let us write down his answers.

Dr. Jason Browdy, an orthopedic surgeon with subspecialty training in Sports Medicine, is a partner at Advanced Orthopedics of Clayton. In his career, he has worked with most of the Los Angeles-based teams, including the Ducks, Dodgers, Magic, USC and others. Locally he has worked with the River City Rage, several high schools and colleges. He describes his philosophy as a surgeon as "less is more," attempting to turn to surgical options only when other less-invasive measures have already been attempted.

Gallagher: OK, so a golf cart beats you in a simple match of Indian Wrestling and suddenly a 20-year-old professional athlete in peak physical condition is out of commission for a full season. Who exactly does this ACL think he is, anyway?

Gallagher: Simpler, Doc, simpler. Why is the ACL so important?

Browdy: OK. Most people can function on a day-to-day basis without an ACL. Walking, jogging - even sprinting may be well tolerated in a person without an ACL. But, without an ACL, it is very difficult to participate in activities that involve sudden changes in direction such as cutting, pivoting and twisting.

An individual with a torn ACL who tries to cut, pivot or twist might feel his or her knee give way or slide out of place. It does not take many of these events for the athlete to lose confidence in the knee. Furthermore, with each giving way event, the knee is at risk for further damage to the cartilage in the knee. For example, if you have ever looked at the end of a turkey drumstick, the smooth, hard, white part is a very smooth coating called articular cartilage. When you damage articular cartilage, the joint is no longer smooth, which can cause pain and lead to arthritis. The knee also has another kind of cartilage structure called the meniscus. The medial and lateral menisci are complex structures with many functions in the knee such as shock absorption. With each giving way event, one can damage the articular cartilage and/or tear the meniscus. 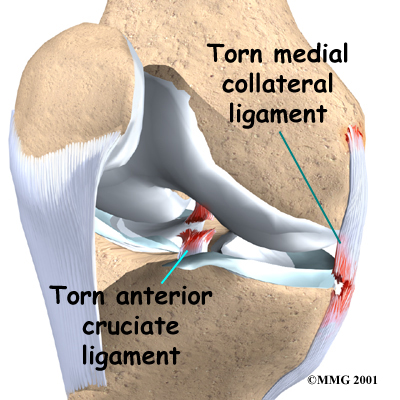 File under 'B' for 'Bleeeeaaaaaarrrrgh.'

Gallagher: This is starting to sound worse than I thought....

Browdy: It is a pretty critical structure for athletes. An ACL deficient knee can make it difficult for people to simply walk on uneven surfaces, run or jump. Some simple, daily activities can be troublesome without an ACL.

Gallagher: So, what you are telling is that Erik Johnson cannot skate without an ACL?

Browdy: Yes and no. He would likely be able to skate without an ACL, but given the intense side-to-side movements that a hockey player makes, he would be at very high risk for giving way events. These giving way events erode the confidence in a player, as one begins to lose trust in the knee. It also puts the athlete at high risk for further damage to the cartilage structures.

Gallagher: Johnson also tore his MCL. Isn't that even worse when combined with the ACL tear?

Browdy: The MCL (medial collateral ligament) is a totally different structure than the ACL. It connects the femur to the tibia on the medial or inner side of the knee. If you think of the knee as a hinge, with motion forward and backwards, the MCL prevents abnormal side-to-side motion.

Gallagher: So, if Johnson tore two ligaments, did he have both fixed?

Browdy: Generally speaking, the MCL can heal on its own, without surgery. It is fairly common to injure the MCL along with the ACL. In most circumstances, the MCL is allowed to heal on its own while the ACL is reconstructed.

Gallagher: By reconstructed do you mean that he was re-built like Steve Austin? Don't you guys just sew the torn ACL back together?

Browdy: That's actually a good question. The answer is no. In the early days of ACL surgery, attempts to simply sew the torn ends of the ligament back together failed. So, we have to reconstruct the ligament. We remove the torn ACL and replace it with tissue from elsewhere in the body. The most common sources of donor tissue are the patellar tendon and the hamstring tendons.

Gallagher: You guys are like Frankenstein. You actually take those tendons to make a new ACL? Doesn't taking the donor tissue hurt the leg or make it weaker? I think I'd be happier if you'd taken the tendons from a dead guy.

Browdy: Only a thin strip of the central part of the patellar tendon is taken. Alternatively, the tendon portion of the hamstring can be used. The muscle part is left intact. Taking the donor tissue to make what we call a graft is probably one of the more difficult aspects of surgery to overcome. That said, multiple studies have shown that most people will tolerate it quite well in the long run.

Gallagher: Speaking of the long run - why did it take so long for Johnson to get back on the ice?

Browdy: The actual surgical procedure is done on an outpatient basis. In surgery, we drill bone sockets into which the donor graft is fed. Then, we secure the graft in these bone sockets with a variety of different techniques. But, this is only the beginning. While this initial "fixation" of the graft is very secure, the body has to heal the graft to the walls of the bone socket. If healing does not occur, the graft will eventually slip out of place. Mother Nature really has the final say in how long it takes for this to occur.

There are a variety of different rehab protocols, but the common goals of all of them are to allow the athlete to regain strength and range of motion without putting too much strain on the graft before it has healed. This can be a delicate balancing act and requires close coordination between the athlete and the rehab specialist or physical therapist. While there is no single, correct answer to how many months it takes for an athlete to return to play after ACL reconstruction, most would agree that it generally takes 4-6 months. The time frame could be longer if other structures were repaired at the same time.

Gallagher: What can you tell Blues fans about Johnson's return? Will he be as good as he was before he got hurt?

Browdy: The goal of surgery is to restore the athlete's anatomy to as close to normal as possible. Our latest technology allows us to do this very well. But remember, Erik Johnson tore his anterior cruciate ligament so he can certainly tear his reconstructed ACL. That said, data suggests that ACL reconstruction can be very successful. Most orthopedic surgeons would estimate that the procedure carries a 90 to 95 percent success rate. This means that the graft will not loosen up or re-tear in the overwhelming majority of cases.

Gallagher: Does this mean that in all likelihood, Johnson will be at least as good as he was before he got hurt?

Browdy:  That question is more difficult to answer for a number of reasons. First, in order to make qualified statements about any treatment outcome, there have to be sufficient numbers of injuries that are treated. Fortunately, there is not a high volume of ACL tears among NHL players. Second, in order to compare how good a player is before and after an injury, we would need objective ways to measure how "good" a player is. Goals and assists are easy to count, but as you know, goals and assists are not the only criteria by which we judge players, especially defensemen.

All that said, there is some published data taken from NFL players that does look at how "good" players are when they return to their position after ACL reconstruction.  The data suggests that even in successful ACL reconstruction, not all players are able to impact the game as well as they did before the injury. The good news is that the vast majority of players were able to return to the pre-injury form.

Gallagher: Dr. Browdy, if I can sum up what you've said, we can assume that Johnson's knee has a better than 90 percent chance of being considered successful. That is, it won't tear again and will perform up to the standard that he was used to before the golf cart wiped him out. Further, statistics show that he is likely to return to playing at the same high level that made him the first overall pick in the NHL draft and has made him the likely No. 1 blueliner in the organization.

Gallagher: So, in the end, the way that any athlete reacts to a big injury like this and what kind of recovery he has can only be controlled by the athlete himself. In other words, Erik Johnson likely had a very professional job done reconstructing his knee and he likely had a very extensive rehab program to get him back to playing shape, and the odds are all in his favor. But if he doesn't have the confidence in himself and his knee, there's a chance he won't return to pre-injury form.

Browdy: As we've said, the statistics are in his favor, yes. But ultimately success depends on many things, including the surgery, the rehab, blessings from Mother Nature, and most importantly, the athlete. When all of these factors are perfect, often it may be the intagibles that player possesses that determines the final outcome.

Gallagher: So, Doc, if EJ sucks this year, can you recommend a good sports psychologist?

Browdy: I'm not falling for that one. No comment.

[Dr. Browdy and his partners at Advanced Orthopedics of Clayton have vast experience in treating sports related injuries as well as musculoskeletal  conditions. They can be contacted at their website or via email.]