We have a fairly high amount of respect for our readers and commenters around here. We make the distinction between the two because we know the vast amount of people who stop by our corner of cyberspace don't always leave a dick joke or nasty gram. Sometimes they just keep browsing on over to the donkey shows at Second City Hockey. That's fine. Thanks for stopping by, come back now, ya hear?

So when we were checking out Puck Daddy (my favorite hockey site on the Internet not about the Blues) on Sunday and saw his latest gallery for a Sports Illustrated fake hockey cover contest, I had to pause and smile. Someone named Matt decided to borrow the photo of Erik Johnson and Cuba Gooding Jr. sans shirts and use it for a magazine cover. Here: 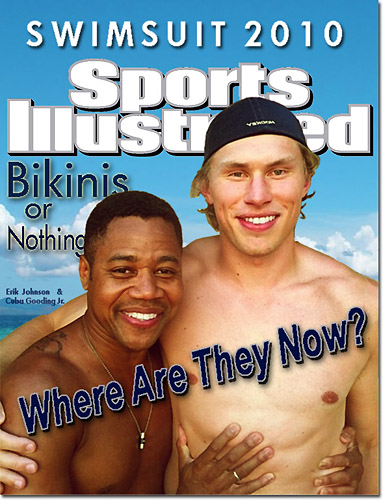 And then I really started to glow when I read the explanation by Wyshynski about the cover:

From Matt in St. Louis ... well, explain yourself Matt: "Well, this was fun.  Inspiration was the 2009 Swimsuit issue with a nod to the Dallas Cowboy cheerleaders ‘Where are they now' issue. Photo credit goes to the best hockey site on the web: St. Louis Game Time."