The Legend Of The Mega Mullet

Share All sharing options for: The Legend Of The Mega Mullet

It is said that in St. Louis, much like in Pennsylvania, there is one day of the year that determines the future, both with furry animals.

Early every February, a groundhog is said to climb out of his hole and predict a long winter or early spring based on if he sees his shadow. He sees it, gets spooked, goes back down in his hole and winter continues. It's all very scientific. And completely reliable.

Well here in St. Louis, the first week of October, the Mega Mullet comes out of his summer hibernation and makes his way down to the Kiel/Savvis/Drinkscotch Center. And if he isn't afraid of his shadow, it means at least six more months of hockey. Well Saturday night before the Blues home opener, THE mullet made its appearance. And he liked what he saw outside with the new Brett Hull statue. And now hockey will stay for at least six months. Photographic proof: 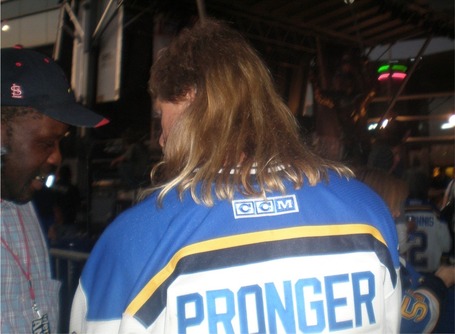 Now please don't misinterpret this photo or its intentions. This fellow is meticulous with the business-like cut in the front and balls to the wall party in the back. He obviously has made a commitment to his hairstyle, a commitment he hasn't broken in years. Just like his jersey choice. He finds something he likes, he sticks with it, through thick and thin. It's quite admirable.

So welcome back Mega Mullet, the first sign that hockey is back and the season can get started. Good to see you again, sir.