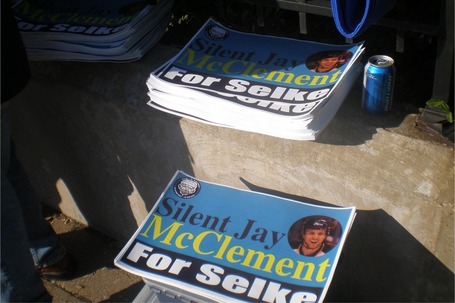 When we said we made a bunch of campaign signs for Jay McClement winning the Selke Trophy for the home opener Saturday, we weren't kidding. Just like this entire endeavor, we're quite serious (the beer can was just to illustrate the size of the signs). We'll talk more about the signs, but let's give a quick update on why Silent Jay McClement needs support for the Selke.

First and foremost, the award goes to the best defensive forward in the league, not the best offensive forward who plays some defense. The past two seasons McClement has played the most minutes of any forward on the penalty kill. He plays some of the toughest minutes in the NHL with starting in his own end and against the opposition's best players. Last year he played more than 3 minutes and 40 seconds per game on the penalty kill. For every 60 minutes of penalty kill time, he was on the ice for five goals allowed, and incredibly low number considering the amount of time he spent on the ice shorthanded. So far the Blues have allowed one power play goal in two games. While that's an incredibly small sample size, let's see how it plays out after two games against Chicago and one against the Penguins in the next five games.

So it was an interesting time before the Blues played the Philadelphia Flyers Saturday night for the first game of the season. People were on the street enjoying music and free stuff waiting for the Brett Hull statue ceremony. We got down there early to sell the paper and distribute as many signs as we could hoping to get a couple on television during the ceremony. One of our commenters even made it on stage and gave some love to Silent Jay. We got a lot of posters into the hands of our loyal readers and dozens of confused people who didn't know why we call him Silent or what the Selke is. My favorite question: "What's a silky?" Here's one of our friends who hands out candy in the mezzanine after Blues games handing out signs. 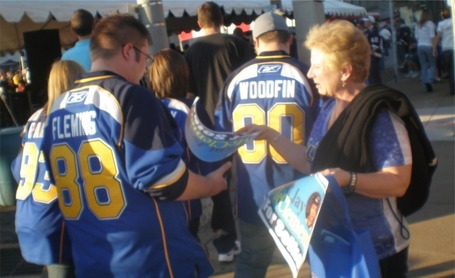 We tried giving them to beer vendors, security guys, police officers and the media. Even if we weren't successful every attempt, we got a few of them out. 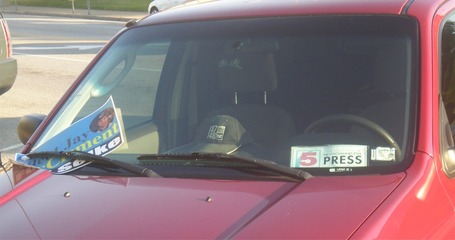 Give us 39 more home games and there won't be many fans who won't hear about Silent Jay and the silky trophy, which actually sounds kind of nicer than the Selke. We had people talking Monday afternoon about the effort.

Next week we'll have more information about how to help us spread the word on Facebook and Twitter. This is grassroots, baby. If we the fans don't try to get him the attention, no one else will. Your suggestions for continuing the effort are more than welcome.