These are tough times for Blues fans, nothing new there. The highs of the season's hot start are now falling towards the lows of harsh reality. The need for the scoring lines to actually, well, score, is more pressing than ever. The odd goals that we've seen in Colorado, and the mounting injuries, demonstrate how unlucky the Blues have been as of late. There's no panic yet; hell, most teams would kill for a 9-4-3 record. Yet, it'd be perfectly understandable to feel like the Blues are a little snakebit right now.

It's time that the Blues start manufacturing their own luck. It happens all the time. We've seen some sparks of life already with David Backes and Brad Boyes.

The Enemy: There's no lacking for motivation tonight. Not just division rivals that we all hate, but a win here would put us tied with Detwat for points in the standings. The starter will likely be Jimmy Howard, coming into tonight's game with a 9-1-1 record and terrific stats (2.15 / .920). Most notably, their top forwards are getting it done on the score sheet. Dan Cleary is on a 5-game goal-scoring streak, and Nicklas Lidstrom has a point in 11 straight games. The Selke Pretender Pavel Datsyuk just ended a 10-game point streak as well. As a team, despite playing one fewer game than St Louis, the Red Wings have potted 10 more goals than the Blues. No surprise, then, that Detroit has not been shut out at all this year.

Winging It In Motown

The puck drops at 6:30 St Louis time, and will be broadcast on TV on FSMW and on radio at KMOX 1120AM. The GDT will come shortly prior to that. Until then, this is your pregame pre-party. Gather here, curse Eastern time zone starts, curse DeToilet, and meditate on one of my favorite images of all time: 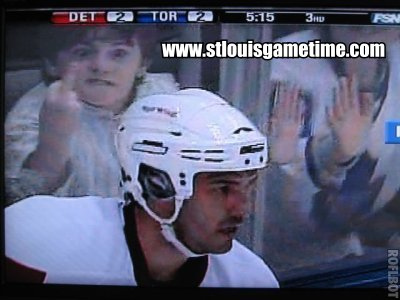 GT says it all (via partstim)