It Has Been Chosen

Share All sharing options for: It Has Been Chosen 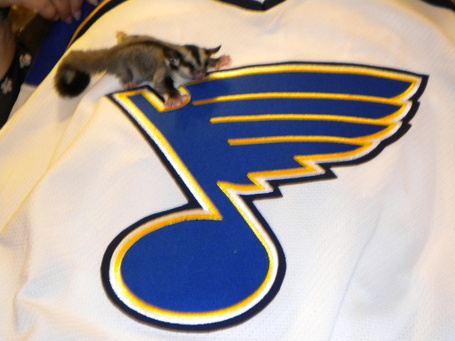 On the morning of Monday, November 22 Answer Dog 2.0 and I had just returned from our morning 6k. It was a windy and refreshing morning.  It was a casual yet perfectly exhausting run. As I finished my breakfast consisting of an egg beater omelet, oatmeal and fruit cup, I opened my gmail account and there it was.  Sent in by the newest honorary Answer Man Crew (AMC) member Jeremy Guyton of .

JG you are a glorious and creative bastard. You have now won the opportunity to join the AMC for a Blues home game in the Answer Basement. As you may or are about to painfully find out, we watch the games in the basement and with shirts off.  Way off.  We have push up and pull up contests.  We chest bump after EVERY Blues goal.  Not just some, but EVERY Blues goal.  If you drink while watching the game, that’s cool but there’s no way you drive home.  You can sleep in the lower bunk. You will also be interviewed for a future Answer Man column for GT printed edition.

So Nation, the winning name for the Answer Glide is officially….El Debarge.  Boo and fucking yeah! Not sure if you all knew this but El Debarge is Spanish for "The Debarge".  What makes this even sweeter is that Sugar Gliders are nocturnal.  Now for those of you in SoCo who has someone reading this to them, nocturnal means that the animal is up during the night time hours and sleeps during the day. El Debarge is known for his mad beats on "Rhythm of the Night" while fronting the band Debarge.  Later during his solo career he asked "Who’s Johnny" and we answered.  Oh sweet Lord did we answer as a nation.  Those were the beautiful 80’s and this is now.

So Answer/GT Nation bow down to the almighty Answer Glider to now be known as El Debarge.  Now the fun begins because I wagered the life of this thing.  You read that correctly, wagered its life.  I bet Phyllis that if the Blues miss the playoffs, she could take El Debarge and determine his fate.  She told me she’d squash it.  The funny part is that El Debarge belongs to Answer Dog 2.0 and no one has ever taken anything away from him.  He’s quite determined (and a Pit Bull mix). She might lose a hand.  I love it. 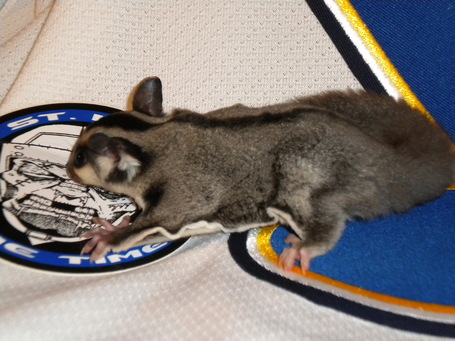