And You Thought Chris Mason Looked Funny Before

Share All sharing options for: And You Thought Chris Mason Looked Funny Before

When it comes to the pecking order for professional sports teams in St. Louis, the Blues are often cited as the third banana to the Cardinals and the dreadful Rams. But when it comes to connecting with fans and charity events that players really get behind, the Blues are unmatched in the Gateway City. Look no further than the afroed Chris Mason.

On Sunday night the floor of the Drinkscotch Center (a never more appropriate name for the place) was again turned into a casino floor for charity. Attendees were able to mix and mingle with players who acted as card dealers and roulette ball spinners (or whatever that job is called). The theme, in case you couldn't figure it out, was Sunday Night Fever. In other words, disco. Blues players were given matching silk shirts. And apparently many of them decided to wear giant afro wigs as accessories.

If players weren't really into the event, they'd never go along with the costume and go to lengths to make them more elaborate. If you look around the Blues' site, you'll see photos of beaming players on hospital visits and at animal shelters and signing autographs for the Dream Night event. I'm not saying that players on the other teams in the city don't do similar things (they do) but the volume of appearances, silent auctions, charity events and the like are just more numerous. It's one big reason why fans connect so strongly with the team. It's good to see the team and the players helping out good causes like the 14 Fund and Ranken Jordan Pediatric Specialty Hospital.

Could you picture Albert Pujols looking like this in public: 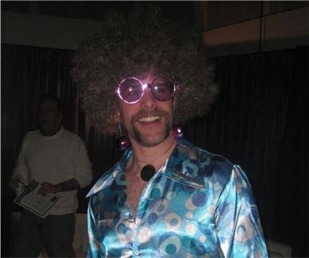