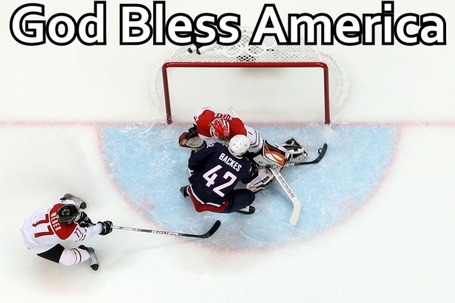 Look, this game is big on the sports landscape. That one American all-sports network that ignores the NHL actually had multiple stories about the game this morning. I've seen on Twitter where churches in Canada had the choir wearing Team Canada sweaters and the minister ending the service with a "Go Canada go!" battle cry. So everything is a little ramped up.

No, this doesn't come close to the Miracle on Ice 30 years ago today, but it doesn't have to. The uniqueness of that event was the timing with world politics and the hockey landscape where the Soviets were as good as some NHL teams. They were unknown Americans playing the unfamiliar role of underdog. And they delivered, giving a whole generation a singular hockey memory. Whatever happens this afternoon will not touch that.

The idea of sending NHL players to the Olympics is to see the best play the best. That's what we've got today. Hockey is Canada's passion, it's No. 1 export and it's identity. Team America wants to fuck with that. And that's why this is your red, white and blue game day thread. One afternoon of hopefully high-level hockey, high drama and high hopes. And then it's back to talking about how the Blues are still four points out of the playoffs. That's tomorrow, this is today.

Get to work and show some god-damned patriotism or something.