Here's Hoping The Olympics Were Just The Start

Share All sharing options for: Here's Hoping The Olympics Were Just The Start

Blues fans have not seen the best of David Backes or Erik Johnson.

Oh sure, they've each had moments. Backes' four-goal game last spring at Detroit obviously comes to mind. And then there was his end-to-end rush in his first Olympic game. Johnson finished a game in overtime this season on a long rush. He scored the third goal on a nice shot in the semifinal game against Finland on Friday. But I think fans realize both are still early in their careers. A lot is going to happen to shape their paths in the league and what they become as NHL players. For both of them, Sunday was a big deal.

Of course any Olympic gold medal game is going to be a big deal, but the fact that they lost the game means so much more. Take a look at the picture at the top of the page. Backes on the far right is pissed. No one in the world thought this team could compete for the gold except the guys in that dressing room. They proved the establishment wrong. They achieved something, yet it doesn't look like it to anyone on that team -- especially Backes. There's something burning in that expression for him. Look at how he's holding the bouquet. He's trying to figure out how to get rid of those flowers. He's burning into his memory how he feels at that moment. He's locking this experience, this disappointment, into his mind's eye so he won't forget how close he was to the gold. In the summer when he's training, he'll remember this moment. When he wants to skip weights or running or an optional practice, he'll transport himself back to the ice in Vancouver and think about his silver medal and that damn clump of flowers in his right hand.

Look at Johnson during the medal ceremony. 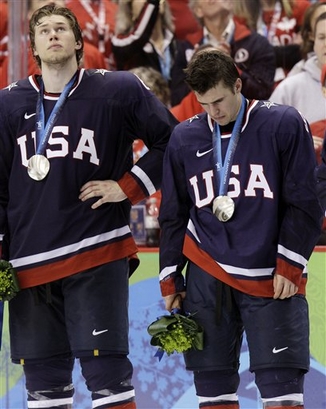 Nope, no smiles here either. Johnson was played in the final minutes of periods and close games. He played in some pressure-packed moments and was one of the bedrock defensemen for the Americans. You have to remember this is only his second season in the league after last year's washout. He only has 129 NHL games on his resume, and no playoff games either. He's played in some international competitions before, but nothing as hectic and intense as that game Sunday. That was the biggest game of his 21 years, bigger than any Blues game he's played yet. The Blues can only benefit from his experience.

These two guys spent time with some of the best young players in the NHL. They saw how other guys prepare for games and the little things they do to get a win. They got motivated against some of the inferior teams in the tournament and the best. And most importantly, each tasted some success but not the ultimate thrill of the gold.

If you don't think these two guys will come back fired up, skating their asses off and working to get a consistently good effort out of this team, look at those two pictures again.