There are a lot of similarities between these two teams that play tonight. Both are on the outside looking in, scrambling for points to get back into playoff contention. STL is in 4th place in the Central Division, and the NYR are 4th in the Atlantic. The Blues have scored 189 goals this year, and have allowed 193. The Rangers have scored 182 and allowed 191. Both teams are hovering around the .500 mark, and both are looking to bounce back off of losses. Sizing up tonight's game, you could think you are suffering from

The song selection is a no-brainer. In one of the best-known pieces of hockey/ rock-n-roll trivia, Blues president (and one-time NYR goaltender) John Davidson was the inspiration for the title of this tune. According to the band, both Mick Jones and Lou Gramm were attending a playoff game at  MSG on April 13, 1978. During the game, a Buffalo Sabres player shot the puck off of JD's mask. It rang his bell pretty good, and JD ended up having to leave the game. It was announced on the PA that Davidson was suffering from "double vision". This turn of phrase caught the imagination of the band, and the rest, as they say, is rock history.

There's another JD connection with tonight's game. Should Tortorella decide to rest his ace goaltender Henrik Lundqvist (fingers crossed! - 2.44 GAA, .920 save %), the back-up is 02/27 waiver claim Alex Auld.  His new mask features Rangers goalies of the past, including John Davidson. 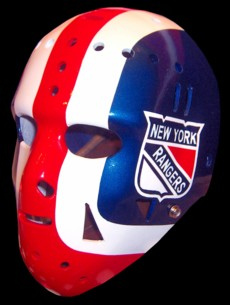 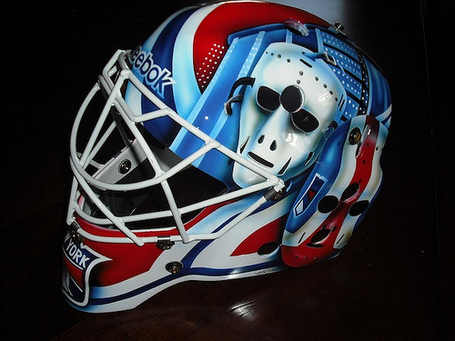 I always dig masks that refer to goalies of the past. Even Ears' was kinda cool.

With the Rangers sitting in 9th place in the East, 3 points behind Boston, expect a complete 60-minute effort from them. They cannot afford to blow off this game, just because we're from the Western Conference. If we are to succeed, we'll need to match that with one of our own. When we played them in STL back on 01/16, we came out on top against a rookie goalie. I suspect we'll face more resistance tonight.

This is also your pregame pre-party. The Puck Drops at 6:00 St Louis time, with the GDT starting shortly beforehand. Until then, get together here, trade St Patty's Day hangover cures, discuss favorite masks of yore, and warm up the ol' commentin' muscles.