Welcome to one of the most interesting weeks of the NHL season with the trade deadline on Wednesday. And with the two-week roster freeze because of the Olympics just ended Sunday night, a lot of deals could be packed into the next day and a half before the deadline hits Wednesday afternoon. The last two years the Blues have played the night of deadline day, which made putting the Game Time paper together really interesting.

With the deadline comes posturing by team officials when they talk to the media. Take Blues president John Davidson for instance. The former broadcaster knows what to say and how to say it. What I mean is, don't take anything he says at face value because it's probably not true or it's code for something else. 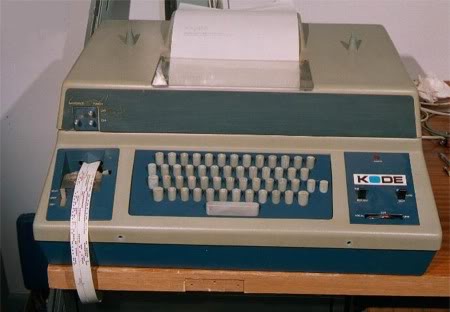 Fortunately we have the trusty GM Translator EZ 2000. Bought at a garage sale about five years ago for $7.50 (I talked them down from $11), you input a statement by a general manager or team official and it translates the words into what the person is really saying.

Over at the Globe-Democrat, they have a couple different quotes from Davidson that we can start with. Davidson told the Web site:

I type all that on the machine and hit the translate button. There's some whirring, some buzzing and the smell of burnt popcorn. It spits out a strip of paper with a translation on it purporting to be what Davidson actually said.

"Somehow this team has gotten better without us doing anything. I don't understand it either. It's the same bunch of bums that played their way into me firing Andy Murray. That sucked. I hate firing people. Ask Larry Pleau. Somehow right before we went on vacation, they decided to beat some good teams. But give me a break, it's one week. The big picture is, they can't keep this up. Even if they play better on the power play. And now all the pressure is on me to help this team make the playoffs. Big picture, that sucks because I'd like to unload some veterans (mistakes, I call them) for some young talent and grow this team for the future. I will be burned in effigy if I do that. It sucks.

Interesting. I thought Davidson was kind of complimentary. Here's another one we put in the machine.

"I think from an organizational standpoint, when you get towards the trade deadline, it's what professional hockey is," said Davidson. "You look at every aspect of it and you try to do what's right for your organization. That's the way we'll look at it going into this time."

Hm. Not sure what that means, "it's what professional hockey is." Translator, do your magic!

See, Davidson can say a lot without saying a lot. It's a talent. He's a Hall of Famer, you know.  One more from the Globe-Democrat:

I think the Translator was smirking while I input the quote. There's some whirring, maybe a small lurch and the smell...of mushrooms. I don't get it, but here's what it spit out:

If someone wants David Backes, they better offer one previous all-star, a first round pick, some cash and a Playboy model to keep me warm at night because if we traded him or T.J. Oshie, skip the burning in effigy, they'd really try to burn me. Brian Burke keeps calling about Backes. Screw that guy. When I see his name on caller ID, I answer the phone like it's a massage parlor that charges extra for happy endings. Unfortunately that only keeps me on the phone longer."

Gotta hand it to the Translator. It makes the boring crap before trade deadline interesting.