How The Blues Put Brad Boyes On The Trading Block

Share All sharing options for: How The Blues Put Brad Boyes On The Trading Block

Bob McKenzie is one of the most connected and respected hockey insiders in the NHL. When he talks on TSN in Canada or tweets updates on Twitter, people listen. So it was interesting Monday afternoon when McKenzie tweeted this message:

Have not heard that but Boyes is available as per Blues fax. $4M cap hit stiff for underperformer.

As per a Blues fax. As in John Davidson wrote down a message, put it in the fax machine and dialed 29 different long distance phone numbers. I also picture him listening to "Livin' La Vida Loca" and discussing how the plot of "Sixth Sense" totally blew his mind -- because it's still 1999 if he's faxing every team in the NHL.

The Blues faxed the league. That is so awesomely old school. Part of me hopes the fax looked something like this: 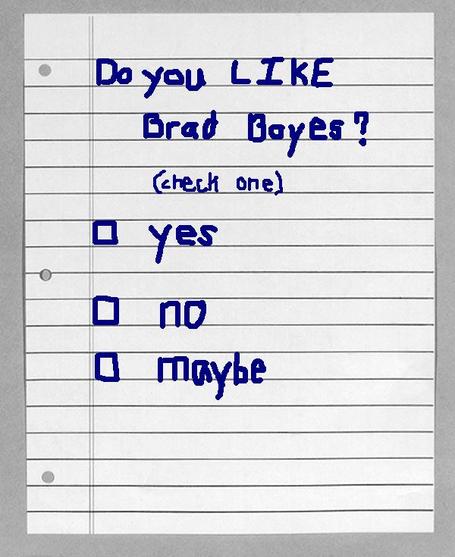 I can just picture the other general managers in the NHL putting a big black check mark in the box next to "no" along with a frowny face on the sheet before faxing it back to St. Louis. McKenzie may be big on Twitter, but I wonder if he understands how it works. 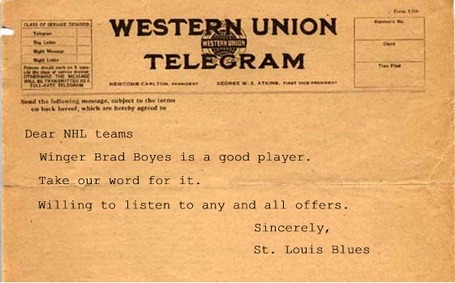 Of course it's not surprising that the Blues would be faxing the league about Boyes. The guy is in the second year of a four-year deal paying him an average of $4 million a year. After scoring 33 goals last year and 43 the year before that, it almost seemed like a bargain. And now here we sit with 19 games left in the season and Boyes just scored his 11th goal of the season Tuesday night in Phoenix. Going into last night's game, Boyes was shooting just 6.5 percent on the season before scoring once on just three shots. It was just his second goal in his last 28 games -- a streak spanning back to Dec. 23. He's been hesitant and unsure and downright lost on the ice the last two months. He's not scoring on the power play. He's not scoring even handed. It's perplexing how a guy who s clearly a goal scorer forgets how to score. It was Brett Hull's biggest fear that never came true -- waking up one day and forgetting how to do what he did.

Fax, telegram, candygram -- I don't think it will be enough for the Blues to get a team to bite on acquiring Boyes. And that's not a horrible thing. He could still be a valuable player that helps the Blues make the playoffs. Or he could be an albatross around their neck making them sink toward the conference basement.