Share All sharing options for: Angst Against Detroit - A Brief History Lesson

The year was 1996.  The St. Louis area was abuzz about hockey for probably the first time in my lifetime because of some guy named Wayne Gretzky.  Mike Keenan was our coach, which at THAT time was fun (little did we know).  Brett Hull was still playing for the Blues and was still awesome.  Al MacInnis was blasting glass and goalies' bones, and best yet, it was for the Blues!  Chris Pronger was a young star trying to come into his own.  There was a lot of red on the Blues' uniforms.  The Note was playing the Red Wings in a best-of-seven Western Conference Semifinal series.  And the Blues had a 3-2 advantage after five games, with Game Six in our house - the nearly-brand-spankin'-new Kiel Center.  Sure, it wasn't the Old Barn on Oakland Avenue, but not every story can be perfect.

This story is no different - it's not perfect.  But it has a happy ending . . . this year, anyway.

I was 15 years old, a freshman in high school, and very passionate about my support for the Blues.  The Internet, much to everyone's surprise, actually DID exist back then, but it was operated with a hand crank from a meat grinder . . . something like this: 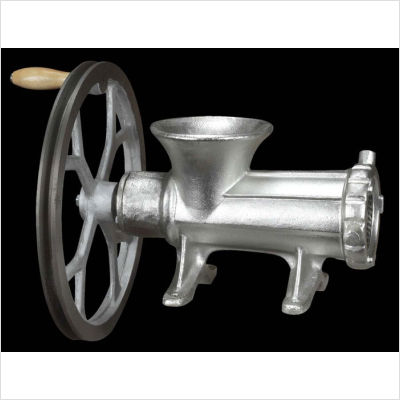 Anyway, about that passion for the Blues . . . feeling confident and cocky as a 15-year-old teenage boy would feel after his team went ahead 3-2 in a series with one of his team's rivals, I searched out a Red Wings fan site of some type (yes, THOSE existed back then, too!) and posted an ultimate note of Fuck Detroit, perhaps before Fuck Detroit came into its' own.  I can't remember what exactly I told them, nor can I find this post anywhere anymore, but to give you a clue as to what it might have looked like . . . well, I'm pretty sure the terms "Sergay Fagarov" and "Kristine Draper" figured in there somehow.  I left my e-mail address at the time (which was, well, everyone in the house's address back in those days - ahhh, the joys of Eudora).  I can't remember why I had to disclose my e-mail address - either I had to leave it there to post what I posted, or I figured, "Well, THIS isn't going to bite me in the ass or anything!"  For being a socially awkward teenager, I had these moments of brash naïveté quite often back then.

Little did I know what was about to happen.  Game Six was a home loss.  Game Seven was a classic contest that ended . . . well, I don't want to fucking talk about how it ended, to be honest with you.  I think you've seen the promo.

The next morning, I happened to be the first person in the house checking our home e-mail.  Thank God for that, for what came next would have given my poor mother a heart attack had she found out about it.  I open Eudora . . . and find FOURTEEN NEW MESSAGES coming my way!  Back in those days, that was KIND of a big deal, and not only that, it took about an hour to get those e-mails to fully load on that hand-cranked Windows 95 computer, limited color monitor and dial-up modem.

Of course, I remember the messages had catchy subject lines . . . well, about as catchy as Red Wings fans can make them, I guess.  "True Blue", "Singin' The Blues", "Blue Feeling", "I'm Gonna Kick You Square In The Balls" (OK, the last one didn't happen, but it may as well have) . . . each one of these messages seemed to have the same tone of "Yep, we beat you guys, and Colorado's next and then we're gonna win the Cup!"

After I finished reading all of these worthless scribbles of douche, I scurried back to their little fan board or whatever it was and posted something to the effect of "Your boys are too beat-up to beat Colorado in the Western Conference Finals."  Hey, I guess getting one out of two right counts for something, eh?  I think there were a few more messages after that, but they all seemed to stop somewhere around the time Claude Lemieux did the following: 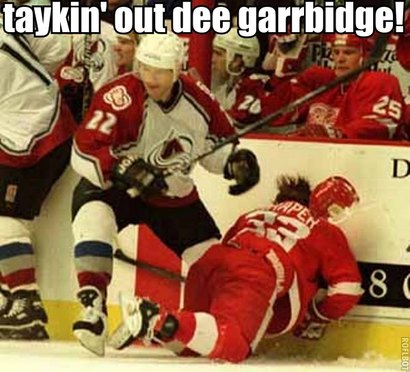 "My node id all stufpfed upf!"

Golly jeepers, I wonder why they would stop at THAT point.  Oh, wait, I know . . . the Wings LOST, didn't they?  WOOHOO!

Sadly I seem to have lost contact with those wonderful Wings fans, but I took special delight in seeing their team fall in the Western Conference Finals that year, more so than I ever had before. Before then, I'd only get excited when the Blues advanced and the Blackhawks were knocked out.  Now, there was another reason to be happy.

This does something to explain why I choose extra teams to root for in the playoffs, even if the Blues have been eliminated.  Sometimes, I will cheer for teams I've disliked in the past for some reason or another (see Canucks, Vancouver and Sharks, San Jose), just so long as they're playing against either Chicago or Detroit.  Sure, I feel dirty for a while, but I've found that the filth can be worth it when the right situation arises.

I had no problem picking the Phoenix Coyotes as my team to follow this postseason.  This was easy not only because of their current flux situation and almost flawless underdog appearance, but because they were playing those old assholes from Detroit.  They put up a good fight, but unfortunately it wasn't enough.  I appreciate your effort, Yotes.

Rooting for the Predators to win their series with Chicago was not an easy decision for me, being that they still employ Jordin Tootoo and they are a division rival, but as they say, "The enemy of your enemy is your friend".  I still may need about 30 gallons of Lava soap and about Lake Mead's amount of water to wash off the stench.  But when I'm done with it, I promise to send the leftovers to Nashville to help clean up the flood damage.

Rooting for either the Sharks or the Canucks does not come easily to me, so you can imagine what it's been like rooting for BOTH of them.  At times, though, things MUST be done.  Right now, rooting FOR these teams and AGAINST my sworn enemies is something that must be done.  Or at least I can find a way to justify it.  And really, that's all I need at this point.

So to the San Jose Sharks, I thank you for once again making me excited about watching the rest of the playoffs.  The Dead Things have left the building, and I feel like a 15-year-old kid again.  No gay jokes this time, I promise.