Thank You San Jose! Sharks Crush Wing Fans, Except For One Guy...

Share All sharing options for: Thank You San Jose! Sharks Crush Wing Fans, Except For One Guy...

Thank you, Sharkies. Now we need a little more help: you're going to have to knock off either the hated Blackhawks or the somewhat less hated Canucks. We promise we might root for you in the Finals if you do this for us.

In honor of the Sharks' win, we give you a photo of their newest fan. It's not often that you can pinpoint the exact moment that a guy leaps off of one bandwagon straight onto the awaiting deck of another bandwagon, but we did it tonight.

I wonder if this dude threw his red jersey in the trash and then stopped off at the Sharks' pro shoppe to pick up his new Heatley 15 jersey before heading home to see how 'his Yankees' did tonight. 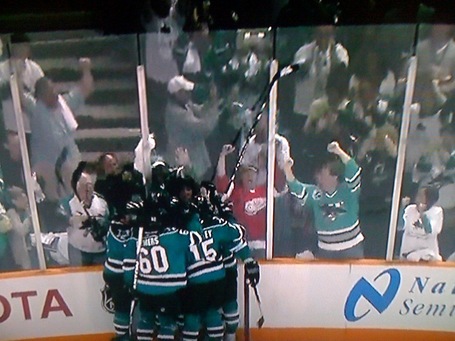