STAUNTON, Ill. – A St. Louis Blues hockey blogger from Illinois received an interesting piece of mail in his letterbox Tuesday afternoon, sparking accusations that at least one Chicago Blackhawks fan was not celebrating his team’s 2010 Stanley Cup victory properly, according to local reports.

Donut King, a perpetually drunk and possibly depraved Blues fan who occasionally writes for blogs such as St. Louis Game Time and The Bluenote Zone, returned home from his regular employment Tuesday afternoon to find in his mail an envelope with his given name and home address handwritten on it. The envelope lacked a return address, but the words "ATTN: LOSER" were found to be inscribed at the bottom of the envelope postmarked Monday, June 14 in St. Louis.

Inside the envelope was a color photo of Blackhawks forward Patrick Kane that, according to forensic reports, was taken Wednesday, June 9 on the ice of the Wachovia Center in Philadelphia. On the photo, Kane was wearing a "Stanley Cup Champions" cap backwards and holding a Blackhawks flag over his head. The photo, printed on plain white printer paper, was allegedly printed from the popular sports website "ESPN.com" on Thursday, June 10, according to the victim and authorities.

According to records obtained by St. Louis Game Time, a penned inscription was found to the right of the printed photo that read as follows (sic'd):

How bout them Hawks!  Does it make you sad that they won?  Well Too Fuckin Bad.  Boo Hoo Loser. 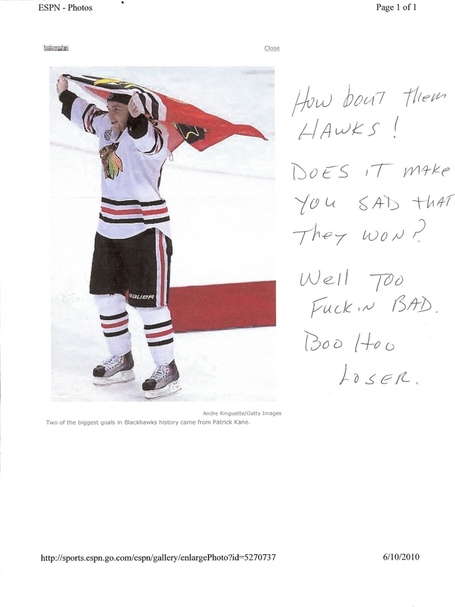 Above: the piece of evidence in question

When questioned about the alleged incident, Donut King submitted the following statement to the press:

I’ve never received hate mail before, and I must say, the first time I get it, I laughed my fucking head off!  I mean, here the Hawks are, they win the Stanley Cup for the first time in nearly half a Goddamn century, and this fan of theirs takes the time from celebrating to send an image with a playfully crude message to a fucking BLOGGER of one of his team’s rivals?!  Comedy.  Fucking.  Gold.  I almost feel like framing this.

As of press time, the identity and whereabouts of the accused Blackhawks fan were neither known nor really given two shits about by both the victim and authorities.

Area Crimestoppers units have instructed anyone with information on the accused fan to point and laugh at the silly son of a bitch if and when he is identified and located.

(EDITOR’S NOTE: Yes, the image is real. Yes, this really did happen. I think I have some ideas of who may have sent this to me. Yes, I did laugh. And yes, I do feel like framing it. Because I am a jackass like that. – DK)