Share All sharing options for: Media Bracket: Hayes vs. Claiborne

Now that we've got two match-ups pretty much in the books, let's get to some ones that will actually cause some decision making.

As a reminder, this is an ongoing tournament of mainstream media in St. Louis that cover the Blues. It's who you like, who you trust, who you want moving on to face another media person in the next round. We'll probably even let the winner know he (or she) is the king of the hockey Internet in the Gateway City. Maybe we can make a trophy. And I'm also finishing a logo for this thing. We're going to look fancy.

Anyway, polls open for 48 hours. Do some campaigning for your guy in the comments. Another vote this afternoon. And here we go. 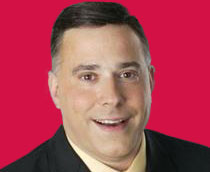 Hayes has been a familiar face on Blues television broadcasts for several seasons now. He conducts pre-game, intermission and post-game interviews. He's also been known to host the studio show on occasion as well has produce humorous comedy bits that run during games. Hayes is also one part of the The Morning After radio show currently on KFNS 590 AM. The show has seen multiple incarnations on that station, moving to 1380 and then returning earlier this summer. The New York Native has worked in Delaware, Pennsylvania and New Jersey. Doug Weight accused him on live radio of ween peaking in the Blues dressing room.

(could not find photo)

Claiborne is a longtime veteran of sports talk radio in St. Louis dating back to the format's inception in the early 1990s. He was a mainstay at all-sports station KFNS before moving to KTRS in 2006 when the Blues were still broadcast on the station. He was recruited to give more depth to the station's hockey coverage, but that lasted just one season before the Blues returned to KMOX after KTRS was partially bought by the St. Louis Cardinals and started airing baseball games. Claiborne has also worked as a sports agent. He hosts several sports shows on the station and is a primary backup announcer for Cardinals baseball.

These 4-5 showdowns are going to be tight, me thinks. Make your case down below in the comments.