Share All sharing options for: Media Bracket: Twist vs. Ramsey

We have an interesting match-up this afternoon. This is the classic professional athlete turned media person against the lifelong broadcaster. Do you value the experience on the ice or the years of observations from an impartial observer?

Twist obviously made a name for himself as one of the toughest fighters in the NHL during his career. Originally drafted in the ninth round in 1988 by St. Louis, he played parts of six seasons with the Blues along with four with Quebec. He earned 1,121 penalty minutes in 445 career NHL games. After his playing career, Twist has found a place with Blues broadcasts in recent seasons first on the post-game show for KPLR-TV and now for Fox Sports Midwest, primarily for home games and often at the downtown St. Louis casino. He's also owned three restaurant/bars and was a regular panelist on the defunct "Chalk Talk" sports show on Charter Cable. 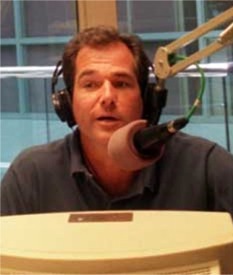 Ramsey is another longtime veteran of St. Louis sports talk radio who has been heard on more than one radio station in the market. He currently co hosts the Fast Lane afternoon program on 101 ESPN. He also has been the voice of the St. Louis University Billikens basketball team for nearly 25 years and was inducted into the school's hall of fame. He previously was a host on KFNS 590 AM before joining the FM all-sports station. "Rammer" as he's known was also a brief fill-in announcer for Cardinals baseball and has hosted a firefighter competition on ESPN. He was one of two entrants to be voted into the bracket challenge by Game Time readers.

That's one-fourth of our media members up for your votes. It'll go quickly, we promise. Polls close in 48 hours. Vote and argue in the comments.