Share All sharing options for: Media Bracket: Miklasz vs Vaughn

Media Madness rolls on, and unlike some of the early matchups that turned into landslides, we're starting to move into some seriously closer seedings. The first one today should be interesting... sway the masses with your arguments in the comments.

By the way, all of these capsules today were written by the media-savvy Brad Lee, mine would have been 100% less professional and about 99% more cursey. 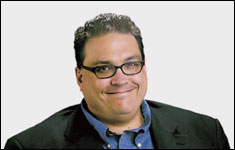 Miklasz has been the lead columnist at the paper for more than 20 years. He's also hosted radio shows on at least four different radio stations including Sports Open Line on KMOX and now his own mid-day show on 101 ESPN. Being the lead columnist, his topics range from Cardinal baseball to Rams football to Mizzou and the Illini as well as the Blues. His cover story about the trade for Wayne Gretzky in 1996 was made into a t-shirt. On his radio show, Blues president John Davidson, head coach Davis Payne and owner Dave Checketts have been repeat guests along with several players. Full disclosure: he has said nice things about Game Time on several occasions on the radio, in print and online.

A native of St. Louis, Vaughn has worked as a sportscaster at KMOV Channel 4 since 1988. In college he played baseball for the University of Missouri and worked for a television station in Miami before returning to St. Louis. He's also part of the cast on The Morning After morning show on KFNS 590 AM. On the show he has made a name for himself in hockey circles with his old time hockey sayings, such as "the pillow stacker blocked the bottom of the onion sack so the sinewy sniper had to go top shelf where Momma hides the cookies to light the lamp." Vaughn has won eight St. Louis television Emmy Awards, five for Best St. Louis Sportscaster. Full disclosure: We're partial to any picture that includes a weird cursive name on it.