Share All sharing options for: Media Bracket: Pang vs. Ackerman

We return to the never ending first round of our media match-up bracket showdown vote-a-rama thing. In case you missed vote after vote after vote last week, we've taken 32 mainstream media people here in St. Louis (there's actually more than that if you can believe it) that remotely cover the Blues, we ranked them, we put those rankings in a bracket and we roll them out for a vote. See who wins. It's not even August yet. NHL training camp isn't even a glimmer in the players' eyes. Roll with it.

Half the first round is done. I'm sure it will move much faster than this the rest of the way. Up next is a radio guy against a TV guy. Baldness vs. wonderful hair. Let's see who wins.

Before becoming the analyst for Blues television broadcasts in the 2009-10 season, Pang was the analyst for Phoenix Coyotes games on a nightly basis as well as holding down several national gigs. He has been featured this summer on TSN's Free Agent Frenzy show. Previously the former diminutive Blackhawk goaltender worked for NBC as the reporter on the glass before the network found a taller bald Canadian. He also broadcast games for ABC, ESPN and NBC at the 2002 Olympics. Full disclosure: he was the best man in Steve Yzerman's wedding. 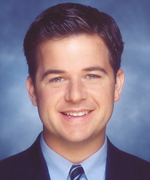 Ackerman was primary host of Sports Open Line for several years before becoming sports director at KMOX. He does sports updates for the Total Information A.M. radio show as well as some work on broadcasts surrounding Blues games. The St. Louis native has worked a number of basketball broadcasts for the University of Missouri system in Columbia and St. Louis. He got his start broadcasting games for the University of Indiana. Full disclosure: he has wonderful hair.

Remember, polls close in 48 hours here in the first round. You like one more than the other? Make your case down in the comments.