When we put on our site over the weekend the image of shirtless you getting hugged with both hands by shirtless Cuba Gooding Jr. in a cabana in Vegas, we did it all in good fun. You had talked about going on the trip on your Twitter, asked others if they were going to be there. You posted the photo to your image account and tweeted the link. You may have had other updates from your trip, but I can't go back and look at them (the updates aren't cached on Google). Now we'll never know because you deleted all mention of the trip in specific terms, including the photo. You know, this photo: 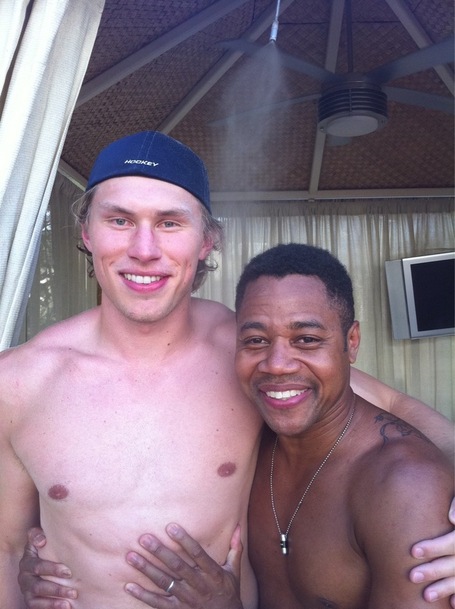 Sir, we as fans have enjoyed and have been looking forward to the coming season with you, David Perron, Patrik Berglund, Ian Cole, Cam Janssen, Roman Polak, Brad Winchester and possibly T.J. Oshie all on Twitter. Even Louie the big blue bear has his own account. This social networking tool connects players and their fan base better than anything else in the past. Let us in on conversations, show us your personality and demonstrate some appreciation to fans and you will build a bridge to St. Louis few players have enjoyed during their careers.

Sure, there's a possibility some photos you don't want your parents to see end up on the account. What happens in Vegas will stay in Vegas...as long as you don't Tweet it. And there's always a chance you let your guard down and say something you regret later. That's always a potential pitfall. But that just lends to your personality and the authenticity of the account.

Take Paul Bissonnette with Phoenix. Not a well-known player. He's an enforcer for the Coyotes. He had started the Twitter account @PaulBizNasty. He started taking photos with homeless guys and talked about how many lap dances Ilya Kovalchuk could buy with his new contract. Of course when the Kovalchuk contract was thrown out by the league, he kind of went risque by saying, "sorry communist. back to the soviet." He's since apologized and deleted his account. And that sucks. It was a joke. But some people with Russian roots got their feelings hurt, they took offense to it and PaulBizNasty is no more.

Don't fall for the politically correct police, EJ. Stand your ground and Tweet whatever the hell you want to tweet. Tweet it big, Tweet it loud. Tweet it proud. Post some shirtless photos of Perron and Berglund. Play some jokes on teammates. Don't make every update "On the ice 3 days this week. Season getting closer, cant wait." Or, " Off to bed. Up early tmrw to get a workout in before a noon flight. Can't wait!" If that's all you want to say, I'm not sure Cuba wants to hug you anymore. He doesn't even follow you on Twitter.

Bring back the love, EJ.

St. Louis Game Time and the undersigned in the comments.