I have enjoyed reading the Mount Puckmore articles that have been written by fans, bloggers, and other media personalities over at Puck Daddy. St. Louis Game Time’s Brad Lee did an excellent job on the Blues Mount Puckmore piece. But my hockey knowledge and history only goes back to the late 90s (when I moved to St. Louis). So I have only experienced Blues hockey for roughly ten years. Any Blues history prior to that I learn from older fans and various media outlets  St. Louis Game Time.

Since my Blues knowledge is limited to just this past decade, I started thinking about how I see the team during that time. When I attempted to organize my thoughts for this article, I wondered, should I stick with the Rushmore point of view, or should I do an all-star format.

What were my thoughts and reasoning on these two options? I’m glad you asked.

There were two distinct eras in the '00s (or 2000s if you prefer). The two eras are the period before the lock-out and the period after. During the '00s, we had two different owners, and two entirely different teams. It would be difficult to come up with just four faces over those two eras.

Now looking at the all-star format, this allowed for more players to be considered and eliminated the consideration of GMs, presidents, and owners. We can then look at the best players for each position instead of trying to judge if a defenseman is better than a forward or goalie (or even a GM). 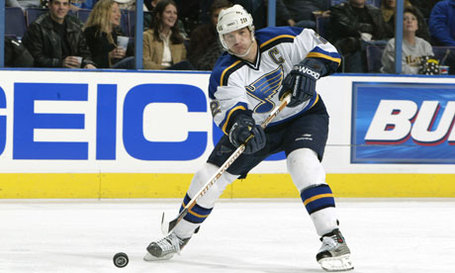 Here are a few of quick stats and a couple of things to keep in mind before you make the jump.

There were a total of 142 players who played at least one game for the Blues during the past decade.

I am sure most of you know about our goaltending issues. Well, we have had 18 different goaltenders. During 2002-03 season, we had 7 different goalies between the pipes. Six have played fewer than 10 games (total) while only 5 played more than 50 games since 2000. To further illustrate our goaltending woes, only 4 goalies have played in more than 2 seasons during the 2000s. Guess who has played in the most seasons since 2000? Give up?... Reinhard Divis* played in 28 games spread over 4 seasons. Johnson*, Stanford (and Sons), and Legace played games in 3 different seasons for the Blues.

As for skaters, 77 skaters played in less than 82 games. Only 24 skaters have played over 200 games and only 19 have scored over 100 points while wearing the 64th note (and Jackman is one of them).

I thought about posting all the team photos from the '00s, but that would be a lot of pixels.
So here is the latest available. 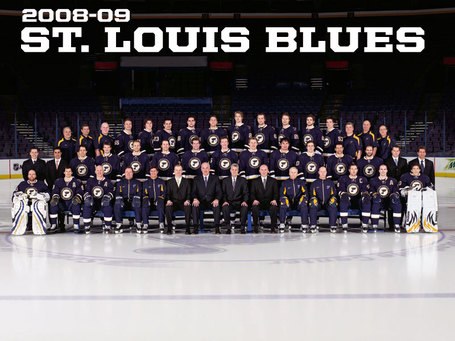 Again, the time period is from the 2000-01 season through last year.

Here are my All-star Blues of the decade.

Starting in goal, you love him (or hate him), but everyone knows him (maybe), # 1 Brent Johnson. With the 2nd highest games played (127) and an overall record of 69-42-8, Mr. Johnson was a better goalie than many gave him credit for. He had a .903 save percentage and a Goals Against Average of 2.26 during his Blues tenure this decade.

Starting on Left Wing, Mr. Dental Work, # 7 Keith Tkachuk. Keith not only leads the team wiff missing teeef, he leads in games played (546), Goals (217), Assists (238), and obviously points (455). Only Reed Low (by 1 minute) and Jackman (by 36) have more penalty minutes than Big Walt. His career and retirement will certainly be a long lasting memory for the Blues fans who were lucky to see him play during the past decade. Thanks Big Walt.

Starting on Right Wing, # 38 Pavol Demitra. He is soo hoppy to be selected. No. 38 may be our last true sniper on the right side. Although Young and Backes are also great candidates, you just can’t beat the 274 points, 114 goals and 160 assists Pavol contributed during his short 4 year career here. Pavol owned the pre lock-out era of Blues hockey while Backes has emerged as the new team leader and all-star at right wing post lock-out. But Backes’ 156 points, 71 goals and 85 assists just don’t measure up to Pavol’s uncanny ability to put up points and score that crucial goal in a game (if he wasn't injured).

Starting at Center, wait for it, # 39 Doug Weight. It can easily be argued that Boyes or McDonald are much better centers and have very similar stats. But this is clearly the case of Weights team leadership makes his case for him. ‘nuf said. I am a bit bitter that he left the team to win the Cup with the Canes. At least he didn't win it with another Central Division team.

Starting on defense, # 44 Chris Pronger. Love him or hate him, this Norris trophy winning defenseman could control the game in every way. PP, PK, 5 on 5, and leadership (ok, maybe not-so much there). Pronger's stats: 214 games, 152 points, 30 goals, and 122 assists. Remember, this is only after the 1999-2000 season. Very impressive stats for only four years.

Also starting on defense, # 2 Al MacInnis. Love him or hate him,…er.. There can NOT be enough said about Al MacInnis. Stats for the decade: 213 games played, 170 points, 39 goals, 131 assists, a PLUS 47 and 171 penalty minutes. While some can argue that Jackman or Salvadore deserve one of these two spots, you can’t argue the importance of Chopper and the gap tooth kid. It is real shame that bastard (Scott Hannan) ended Chopper’s career. (Special Note: Someone please edit Scott's Wiki page to add this fact)

For the record, Brewerbot’s MINUS 76 rating (and his outdated software) excludes him from ANY spot on MY Blues All-star team.

Looking at these picks, it is clear that the pre lock-out era is prominent.  While Jackman and Mayers are two of the longest tenured Blues that played on both sides of the lock-out, only Walt had significant numbers and contributions to the team post lock-out.

I can’t help but feel that a few great players in the post lock-out era were left off my starting line-up. Perhaps I should have done a starting lineup for both?  Nah, too much work.

Fine Print: *All stats used were copied compiled from the Blues website and manipulated organized by some guy waiting not so patiently for Blues hockey to start again. The asterisk, in fact, is used due to an error in the 2002-03 season. Johnson also played in 2003-04 which would make him tied with Divis for four seasons played since 2000. Who knows how many other errors are in the data.

After putting together my starting line-up for the All decade Blues team, I decided that it's too much work and am going to now make let you, SLGT nation, contribute your picks for the rest of the All decade team.  Please add your picks in the comments and feel free to bash discuss my picks.

Perhaps this will help pass the time until hockey season gets here... or not.

PS, Have you figured out who the Blues player pictured above is (to the left of Chopper)?