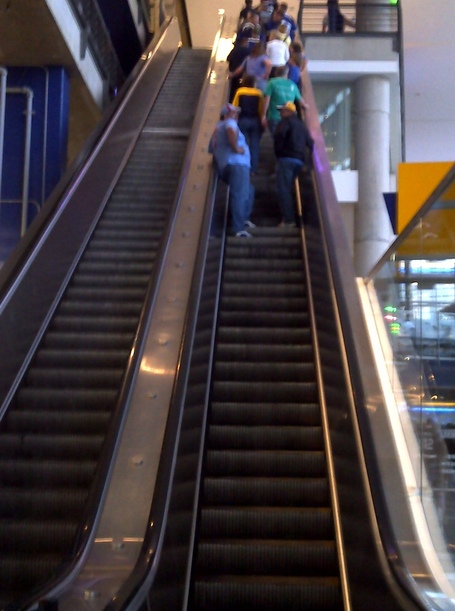 When news breaks, we fix it. Tonight for the first time since Oct. 8, 2009, Blues fans were able to ride in mechanical comfort from both sides of the Drinkscotch Center's main level to the penthouse mezzanine. Nearly a year ago after the home opener loss for the 2009-10 season, the escalator near the main atrium of the stadium malfunctioned injuring some fans and giving many a pretty good scare. That was the only night of the season that escalator was operational. The rest of the season, a blue curtain and makeshift merchandise stand blocked the ugly truth that a movable stairs was immovable.

So in other words, the ownership of the Blues fixed the goaltending but didn't address the team's offense, but the people too lazy to take the stairs have a quick way to the cheap seats. Don't get me wrong, I take the escalator pretty much every game. But a scoring winger would be nice too.

And I don't care if you saw the escalator working for Lady Gaga or some shit. That doesn't count. The Blues played a preseason game, by the way. I'm sure one of the teams won. I voted in the poll earlier Tuesday that the preseason sucks.

This was a special Fixed News report. We now return you to our regularly scheduled dick jokes.