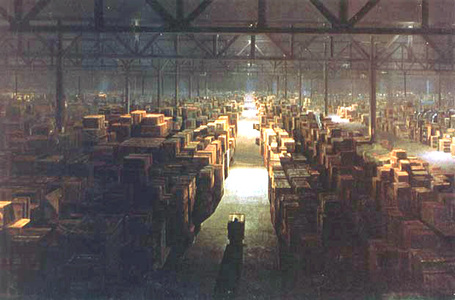 Welcome to the Links Factory! You'll find the "NHL News" boxes are just above the Ark of the Covenant. Be sure not to confuse the two.

When Joe told me that he was leaving the Morning Links to take a job down at Game Time corporate, I knew it'd be quite an adjustment. "But PCS, he's only moved one column to the left according to the bottom of the website." That may be true, but you didn't text back and forth past midnight trying to figure out how one of us was going to get in front of a computer while debating how much ass Jay McClement kicks (Answer: copious amounts). While I'm excited to see the new folks bring the links, I'll have to poor out the occasional Literacola for Averagejoe, my original Link Rat partner. Car Ramrod forever.

As mentioned, there'll be two new writers appearing on the bottom ledger of the website. It took lots of deep thought, careful consideration, and cheap booze to finally make my decision, but I ultimately settled on Hartigan for the Weekend Links with BradFlick55 serving as the back-up. That's right, Game Time is all up in this Title IX stuff by bringing another lady on board. (Seriously, she earned the shit out of this job) You'll read my stuff on Monday-Thursday mornings with Hartigan linking Friday-Sundays.While waiting for a text from one of us asking for him to cover, Brad will probably be sitting on a bench somewhere opening a bench door while wearing a vintage Blues hat and rocking a killer 'stache. Either that or he'll continue to keep Scottrade ice clean during commercial breaks. Whichever.

Rookie hazing and congratulatory messages for them are to be deposited in the comments.