Share All sharing options for: The Blues Power Play Dance

I think it was two years ago that I first noticed the beginnings of what was to become The Blues Power Play Dance. When we first started seeing it, no one I sat by knew what to make of it. It was weird, yes, but it wasn't necessarily bad either.

Here is one of the better examples of it, and this video gives you a good feel for what it looked like at first; usually just one guy in a section or a couple people doing it in unison, but most of the rink still sitting and staring:

It clearly wasn't being started by the team in one of their overt This Is How We Do Things Now moves and it wasn't one of their ‘guerilla' marketing schemes, some of which have failed miserably (Blue Revolution, anyone?) and some of which continue to work really well (you know those jumbotron ‘chance' viewings of fans in the other teams' jerseys being humiliated are rigged, right? Of course you did). The Power Play Dance was clearly organic, which is normally something I can really get behind, but it was also clearly just . . . weird. It meant nothing and had nothing to do with the upcoming power play. It wasn't intimidating to the opponent and it wasn't meant to pump up the home team.

It just existed in some sort of vacuum - no beginning, no end, no meaning, no purpose.

Last year it started to get some serious momentum. More and more people were doing it, even though fewer and fewer of them knew what they were doing or why. It was about that time that it started to polarize the fans too. There were a lot of people who love it unconditionally - they have no idea where it started, what it means or what it's supposed to do. They just know they love doing it. The other side has people who absolutely hate it - they don't know why it started or where it started or why people do it. They just know they hate it. I've seen people bring signs to the game imploring people to stop doing it and I've seen people write vehemently about how stupid it is on our website.

At some point I put a little blurb in the Game Time paper about the Power Play Dance; I asked anyone with information about how it started to contact me. A few days later I received an email from someone who sits in Section 316. They claimed that the people who have seats in the last row of one of those sections all started doing it a few years ago. It wasn't meant to be anything other than a silly ritual for those season ticket holders. For some reason it had started to catch on with other people.

I accepted this explanation as I didn't have any reason to go against it. It didn't really swing me in one direction or another; I remained pretty ambivalent about the whole thing. If people want to do the silly thing, I though, let them. It doesn't bother me at all and people do a lot of other things that look silly at games anyway, why not one more? Of course, I wasn't exactly motivated to stand up and start pumping my arms like a short-circuiting robot, either.

A few months ago a t-shirt vendor posted one of their new designs on our website to show people their new design. It was a Power Play Dance shirt with basic instructions on how to do the dance: 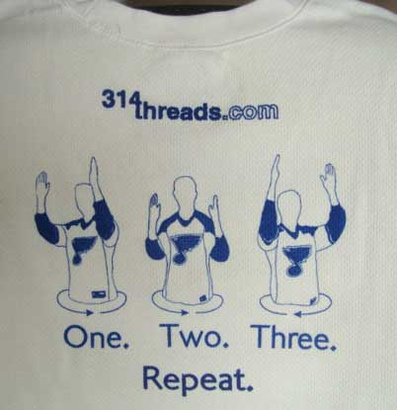 In the comments under the post, a few of our readers made note that they hate the Dance and certainly wouldn't be buying a shirt about it. Then one poster made the comment that the Power Play Dance should not be done because it started as a way for people to make fun of someone. This person's story was that the Dance was actually started by a kid in section 316 or 317 who used to do it all by himself. Later, the people who sat in the back row of that section started doing it to mock the kid. The kicker of the story and the poster's reason for why it should be stopped immediately, was because the kid in question was apparently mentally challenged in some way.

If true, the new story set a few of us back. While I couldn't really care less about this ritual, if it was being done to make fun of a kid who clearly has some difficulties of his own, I really didn't want to be part of it. The story seemed to jibe with the original story I'd heard, so I really considered it to probably be true.

A few weeks later my family was at dinner with my mother-in-law and sister and brother-in-law. Somehow the question of the Power Play Dance and its origins came up in conversation. I gave my nutshell version of the story and summed it up by saying that I wasn't sure how I felt about it with the new information I had. My wife, on the other hand, knew exactly how she felt.

"You know what? Everyone should do that stupid Dance then. If it was done to make fun of that kid and now the whole arena is doing it, who wins? Not the jackasses who were making fun of him. The kid wins. Everyone is doing his move now."

So now, of course, I have an opinion on the Power Play Dance. I'm totally for it. Do it happily or seriously or even reluctantly. But if you do it, make no apologies for it. It's one of our rituals now and I guarantee you that if you do it and it makes one of your seatmates mad or annoyed, that's nothing compared to how happy it's making one kid.