Share All sharing options for: The Goalie Guild's Take On Blues Netminders

The Blues goaltending has been a topic of conversation since before the season began and this weekend's games did nothing to temper the talk. Can Jaroslav Halak become the undisputed starting franchise netminder he was acquired to become? Just what do the Blues have in back-up Brian Elliott?

As luck would have it, we received a copy of The Goalie Guild's NHL Goalie Style Sheet this morning in our inbox. With their permission we have reprinted the page on both goalies below, including their elemental chart. Interesting reading from one of the most respected goalie analysts out there in Justin Goldman. He has been quoted on NHL.com as well as by the Washington Post.

The least you can do is go check out the website, The Goalie Guild and follow him on twitter @TheGoalieGuild. The next best step would be to cough up the $9.99 and get your own copy of the NHL Goalie Style Guide. As someone who finds goalies to be fascinating (read: probably insane), I found it to be consuming. I even read about goalies I don't really care about, just to see read their opinion of them. 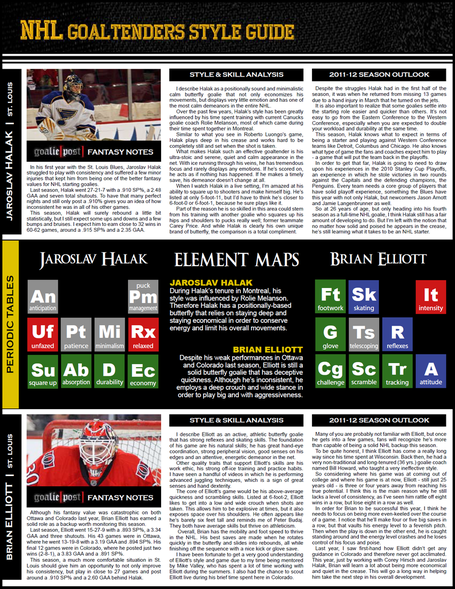 That's a pretty good analysis of both netminders. In fact, it makes me feel comfortable in espousing the, "Let's all calm down and see how this develops over the first half of the season" approach to our current struggles.